The Morning Post on 21 July 1823 reported that 'the Duke of Sussex has appointed the Rev H B W Hillcoat, MA, of Queen's College in this University, and Minister of St Mary's Chapel Bath, one of His Royal Highness's Chaplains.' Henry had continued his studies at Oxford University and was awarded a Doctor of Divinity at Oxford University on 1 June 1826. However professionally, life was not going smoothly for Henry. Nineteenth century novels including those of Jane Austen often refer to the system of patronage existing in appointment to churches to England and Henry's story provides an example of this.

Henry was the minister of St Mary's Chapel in Queen Square in Bath. According to a report of a court case held on 27 November 1828 (Mosey against Hillcoat) that appeared in The Times newspaper the following day, the chapel had originally been built around 1735 by a group of gentlemen who then paid a rector an annual salary for officiating at services. These gentlemen owned the property and divided any profits from the rental of pews among themselves and there was no positive proof that the church had ever been consecrated. In 1817 Henry purchased all the shares in the church and conducted services in the building. In 1819 the Rev. C A Mosey, who was Rector of the Parish of Walcot, transferred parochial services from the chapel to the parish church and forbade baptisms and marriages in the chapel. However in 1821 Henry obtained a licence from the Bishop of Bath and Wells to conduct all the usual services in the chapel. In 1828 Rev. Mosely decided to take legal action resulting in the court case where arguments were made that as there was no proof that the building had been consecrated, Church of England services could not legally be held in the chapel. Much of the argument appears to have been, not so much on the legality of the services but about who should receive any money from the chapel. Henry continued conducting services in the church. When a new rector was appointed to replace Rev. Mosely in 1834 the dispute appeared to disappear. 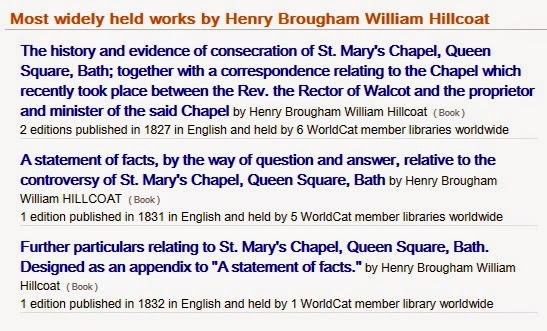 Between 1827 and 1832 Henry wrote three books providing his viewpoint on the controversy of St Mary's Chapel. For those who are interested, A Statement of Facts has been digitised by Google Books.

The court case had cost Henry money and he had to mortgage the chapel. Over time the size of the congregation declined and Henry found himself in financial difficulties. He tried without success to sell the chapel. The Bishop revoked the licence and closed the chapel and Henry and his family left Bath.

On 12 May 1835 Henry Brougham William Hillcoat married Catherine Pym (1799-1884) at St George's Church, Hanover Square in London. Catherine was the daughter of Francis Pym (1756- 1833) and Anne Palmer (1760-1838). Henry and Catherine had three children - Alfred Hillcoat (b.1840), Catherine Susannah Hillcoat (b.1841) and Theophilus Pym Hillcoat (1843-1903).
The family moved to Liverpool where Henry became vicar of St Mathew's Church in Scotland Road. The 1841 census shows the family living in Bath but by the 1851 census they are living in Nertherfield Road, Everton. An article in The Times, 15 December 1849, shows that the family had been in Liverpool for a while as the newspaper was reporting another court case involving the Rev. Hillcoat, this time being Hillcoat v Archbishops of Canterbury and York. St Matthew's had been created as a chapel in 1812 after being purchased from a congregation of dissenters. It was built in the year 1798 and was demolished in 1847 by the Bury Railway Company, who purchased the Scottish church, St. Peter's, in Scotland Road, as a replacement. Henry's dispute with the Archbishops was whether the parish church had received sufficient compensation for the land acquired by the railway company. The Court ruled in favour of the Archbishops.

When Henry left Bath there was still a dispute about money he owed from the costs of an abandoned lawsuit. On 13 June 1853 he was arrested and taken to the county gaol at Lancaster Castle. He was in gaol for more than a year.