The report of Mary's trial records that Palmer, after drinking with a friend for much of the evening, drank some ale with the young women before the three went to 45 Cable Street - a house operated by Elizabeth Sully as a brothel. [It was not unusual for young girls to be working in brothels at this time.] It was two hours before Palmer left the house and it was another hour before he noticed that his silver watch was missing. The following day police found the watch among the feathers of the bed of Elizabeth Sully. (1)

At the trial at the Old Bailey held on 7 May 1788 Elizabeth Durand swore that Mary took Palmer's watch and gave it to Elizabeth Sully.

Locating information about the lives of female ancestors can be a challenge but if they were convicts there is some information about them in convict records. I have not been able to locate a birth record for Mary but she was probably 15 when arrested so would have been born c1773.  Although I have found baptisms for children named Mary Bateman in the London area in the right time frame I have no proof that any of them are our Mary. There is also the possibility that Mary may have travelled to London looking for work from another area.

After her arrest and conviction Newgate Gaol was Mary's home for ten months. Conditions in the gaol were overcrowded and unhygienic with limited food rations. It was not until 12 March 1789 that 108 females (including Mary) were transferred by cart from the prison to the transport ship, the Lady Juliana - a ship which was to carry 226 female prisoners to Sydney Cove. Having escaped the confinement of the gaol the convicts now faced confinement aboard a ship for the next fifteen months. 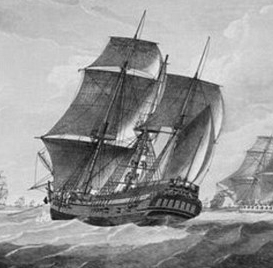 The ship remained on the Thames until early July when it sailed to Portsmouth and then to Plymouth before beginning the long voyage to Australia on 29 July 1789. The Lady Juliana travelled to New South Wales via Teneriffe, Cape Verde Islands, Rio de Janeiro and Cape Town arriving at Port Jackson 6 June 1790. The actual trip took eleven months. It was a long journey. (3)

When the Lady Juliana arrived at Sydney Cove supplies for the fledgling colony were unloaded before, on 11 June, the convicts were finally allowed on shore where they were accommodated in the hospital building or huts or tents. It must have been a relief to be on land again though the convicts were probably dismayed to see the settlement of huts in what would have appeared an alien environment. On the Sunday the convicts attended a church service where babies born on the ship were baptised.(4)

After a short stay at Sydney Cove many of the women, including Mary, boarded the ship, Surprize, to sail to Norfolk Island arriving 7 August 1790. At Norfolk Island Mary met George Guest (1765-1841) who had travelled to Port Jackson on the First Fleet and then to Norfolk Island in July 1790.

Mary and George were married by the Rev. Johnson on 21 November 1791 but had probably been living together prior to that time. Mary was mother to five children that we have records for - Sarah born 1792, George 1794, John 1798, Mary 1803 and William 1804. Unfortunately her daughter, Mary, died aged 20 months in April 1804, three months before the birth of William. 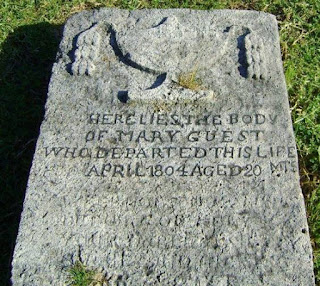 We know that George owned parcels of land on Norfolk Island where he was reputed to be the largest landowner. Hopefully Mary led a settled life with her family on the island before her life changed again. When the government decided to close the Norfolk Island settlement Mary and her family relocated in 1805 to Hobart Town, yet another new colony.

In January 1806 Mary and her family left for Port Jackson in the ship, Sophia, due to 'the want of Education' for the children.(5) Although George travelled between Port Jackson and Hobart Town on many occasions, subsequent records show Mary only living in New South Wales.

Mary probably lived in Pitt Street, Sydney, as a newspaper advertisement concerning a burglary at George Guest's house includes descriptions of female attire among items stolen.(6) However George also had other land in the colony including at Bullanaming.(7) 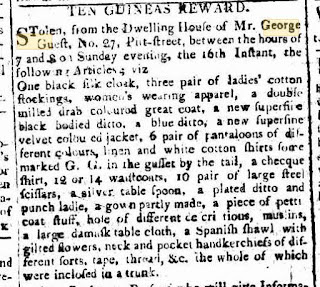 Mary's apparent instability was first noted in May 1810 when, in a petition to Governor Macquarie, George stated that his treatment over land claims had resulted in his wife being deprived of her reason and that two men were employed to restrain her.(11)

The New South Wales Census for 1828 shows her as a patient at the Lunatic Asylum at Liverpool.(12)

The final mention of Mary is in the New South Wales Convict Death Register recording her burial at St Luke's Cemetery, Parramatta, on 2 April 1829. She had died the previous day aged 56. (13)

When exploring Mary’s story, it is easy to understand how, later in her life, she suffered from a mental illness. This is a sad story compounded by the knowledge that in New South Wales, isolated from her growing family, Mary would not have seen her children marry or have known her many grandchildren.

This post was written as part of an assignment for a course on Convict Ancestors, one of the units offered by University of Tasmania, Diploma of Family History.
Posted by Vicki's Blog at 14:37