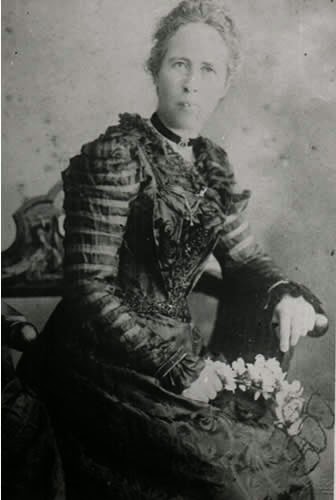 Catherine Anna Louisa Hillcoat was born in Adelaide on 4 June 1852. Catherine was the eldest daughter of John William Hillcoat (1828-1907) and Catherine Ellen Mant (1827-1903). John and Catherine had married in Bath, England, in August 1851 and left for Australia just over two months later. They arrived in Adelaide on 1 February 1852.

Initially the family lived at different locations in South Australia where Catherine and John's first four children were born. In 1858 the Hillcoats were visiting family in England where Catherine's second sister, Ethel, was born in Liverpool. On returning to Australia they moved to Maitland, New South Wales where the next three children were born. Gold was discovered in the Gympie area in Queensland and the resulting goldrush lured many people to the area including John Hillcoat and his family. The youngest son, Harold, was born in Gympie in 1869.

Catherine Anna Louisa Hillcoat married Alfred Percy Lord at the Memorial Church (Christ Church) in Gympie on 11 April 1877 when they were both 24.

Initially they lived on Alfred's property, Woolooga, but after a series of droughts they had to walk away from the property in 1880. It was shortly after this that Alfred started working in the AJS Bank at Maryborough and then at Gympie, where he was manager, until the banking collapses in the early 1890s.

When the banks failed Alfred renewed his interest in owning properties and moved the family first to Kiah Lake near Cooma and then to Oceanic View near Narrabri. Alfred appears to have managed the Narrabri property mainly from Sydney as he also had a home in Sydney, first at Lane Cove and then at different addresses in Hunters Hill. Family stories tell of the younger boys playing by the Lane Cove River when they lived there. In 1906, when Alfred purchased the first of his Queensland properties for his sons, Catherine definitely stayed in Sydney. She was unwell and died on 1 January 1907. Catherine was 54 when she died. She was buried at Gore Hill Cemetery.
Alfred and Catherine ensured that the children were well provided for. The boys formed a partnership - Lord Bros - to manage the properties in Queensland. Robert and Arthur were at Victoria Downs, Reginald at Biddenham and Victor and Guy were at Chatham.

The partnership continued until 1922 when Robert bought out his brothers' shares in Victoria Downs and gave up his share in Biddenham and Chatham. Arthur Lord then looked for property in northern Queensland but in 1924 purchased Metavale near Cunnamula. Reginald Lord continued to manage Biddenham.

According to Mary Roberts in her book, Victoria Downs, Guy wasn't interested in being a grazier but he was interested in financial matters including the stock market. He also travelled to places such as Hong Kong and New York. He died in 1927 aged 38.

Victor remained a grazier for a number of years at Chatham and then at Lorne Peak before purchasing 10 acres at Baulkham Hills where he grew gladioli.

Bea (Mabel) spent time at Victoria Downs where she met a wool-classer, Harry Midgley, and they married in 1923. Her two sisters Lou and Ruby lived in Sydney and when their father purchased the house in Manly, it was purchased in their names.

Catherine Anna Louisa Hillcoat was my great grandmother.
Posted by Vicki's Blog at 22:11