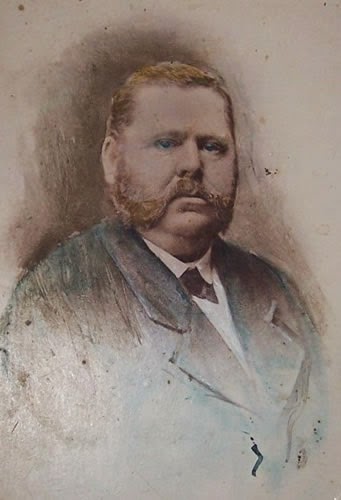 William Clifton Weston was born in New South Wales in 1833, the son of John Bennett Weston and Mary Farrell. His brother, John W D Weston was born in 1832 and died the same year. Another brother, John Bennett Weston, according to the Dubbo Liberal and Macquarie Advocate 1 April 1911, died in Lancashire on 27 January 1911. I have so far been unable to locate a date of birth for him but as there had been another child called John he was possibly younger than William. I am also still looking for information about William's parents.

William was 26 when he married Jane Cox at the Wesleyan Church, Sofala, New South Wales, on 11 May 1859. Sofala is 46 km north of Bathurst and was a goldmining town. On the marriage certificate William's occupation is listed as being a surgeon.

In October 1859 a note in the Sydney Morning Herald reported that 'the following gentlemen have been appointed coroners for the districts specified, in connection with their names respectively ... Rylstone - William Clifton Weston, Esq., surgeon. (Sydney Morning Herald 22 Oct 1859). Rylestone was a small settlement to the west of the Blue Mountains. While in Rylestone, their first child, Percy Clifton Mckay Weston (1860-1947)  was born. By July 1860 there was to be another move, this time to Kiandra, a goldmining town in the Snowy Mountains  - William Clifton Weston, Esq. has been appointed coroner for the district of Kiandra (Australian Home Companion & Band of Hope 14 July 1860). Jane may have remained in Rylestone as her second child, Mary Mornington Weston, was born in Rylestone in 1861. The next move was to Coonamble, on the Castleragh River 569 km north west of Sydney, where the family lived until about 1878. Six more children were born to William and Jane while they lived at Coonamble.

William held a number of other positions in the town as well as Coroner. The first public school was built in 1869 and William had been appointed to form the Public Schools Board for Coonamble in 1868. He was also a JP and from 1870 could consent to the marriage of minors in the Coonamble, Dubbo districts. He was also the Clerk of Petty Sessions at Coonamble.

William worked in Parkes for eleven years until his death in 1889. According to his death certificate he had been ill for a month before his death on 14 April 1889. There were a number of reports of his ill health and subsequent death in a number of newspapers. Below is the obituary from the Molong Express and Western District Advertiser 20 April 1889:


Death, of Mr W. C. Weston, C.P.S., Parkes. — This gentleman, we learn, died at Parkes on Sunday night last. It appears that the bones of the foot had begun to decay, and amputation was resorted to on Thursday, the 11th inst. Mortification, however, set in and the patient expired on the day above mentioned. The deceased was a very old public officer, having entered the public service 25 years ago, and was highly respected; he had been C.P.S. and Crown Land Agent at Parkes for over 10 years. Being a member of the Masonic brotherhood, the remains were buried on Monday afternoon with Masonic honours, the funeral being largely attended.

William Clifton Weston was my great (x2) grandfather.
Posted by Vicki's Blog at 20:07