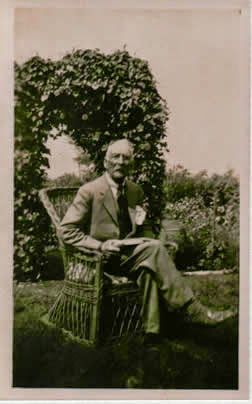 George Hutton was born in Bath, England on 5 May 1850. He was the eldest son of William Forbes Hutton and Eleonora Mackillop. Later in 1850 his parents returned to Madras, India, where his father was a captain in the 34th Native Infantry. George's sister, Jean Elizabeth was born in Bangalore, India in November 1851. His parents returned to Bath in 1854 when a second sister for George, Eleonora Mary, was born in May. At this stage I do not know if George went to India as a baby but we do know that during the early years of George's life his contact with his parents would have been limited as he and his two sisters lived in Bath with his  grandparents, George Mackillop and Jean Eleanora Hutton.

On 23 October 1855 George's grandmother wrote a letter to her daughter in India providing a progress report on the bairns including information on George's first lesson:


George is greatly improved and is reasonable and obedient - he speaks more intelligibly, and does not lose himself so often in a maze of words and thoughts - I hope that when he can read he will learn to express himself well and clearly; he had his first lesson this morning and was very attentive - but I will have to begin with BA again - humanly speaking there will be no more interruptions and I expect to have to give you a good report of his progress in my next. Bessie tells me he was most anxious to do everything "as Grandmama would like". He does not know the Lord's Prayer quite perfect but almost so. I do not think he is quick at learning by heart, at present - but his technical memory will probably improve when he acquires the habit of giving his mind to his occupation. He is to write to you next, if he is a good boy - this goes by Marseilles and therefore must be brief and light.

The 1861 English census shows that George and his family were at the home of their grandfather, George Mackillop, at 26 Grosvenor Place in Bath. George's grandmother had died in 1859. There were five house servants working in the house. George was listed as being a scholar.

The next we hear of George is on 30 August 1869 when he arrives in Melbourne aboard the ship, Somersetshire. In the early 1930s George wrote detailed notes about his his first few years in Australia. He was met by Daniel Stodhart Campbell who took him to his home in Richmond where he stayed for several days before travelling to the property, Bundyulumbah, a sheep station north west of Deniliquin in New South Wales where he worked for Mr D'Arlet until November. George spent the next two months in Melbourne looking for work until he met Dick Creswick who managed a property, Brim, in the Wimmera. Dick Creswick invited George to return to Brim with him so they travelled by train to Ballarat where George purchased a horse and they then proceeded to ride to the property. Unfortunately the horse damaged a leg so they left her at Avoca and purchased a buggy to take them the rest of the journey, stopping off at the Avoca Races en route. George spent more than twelve months on Brim. George estimated the size of one paddock being about 20,000 acres and noted that he never rode the entire boundary fence of any paddock, the area being so huge.

On 31 May 1871 George's father arrived in Australia and he left Brim to meet his father at Ercildoune, a property near Ballarat owned by the Learmonths who were friends and business associates of the George Mackillop. According to George, his grandfather had helped finance the purchase of Ercildoune by the Learmonths. Unfortunately, before George Mackillop left Hobart, there was a dispute about repayment of the loan but the differences were eventually resolved.

George and his father returned to Melbourne and then travelled by ship to Launceston to view the Castra project, a settlement established by the government to encourage the settlement of officers from the Indian Army in the region. George noted: 'It was raining hard when we got to Deloraine and rained all night, so Dad jibbed on a 40 mile drive over bush roads in an open buggy. ' Instead they took a coach to Hobart. 'We had a wretched journey down, frosts and fogs nearly all the way, and as the coach was full inside we rode on top of the coach and were almost frozen.' After a week in Hobart they returned to Launceston by coach. 'Father tried to get inside seats on the  coach but they were all booked, but we brought blankets and rolled ourselves in those during the journey so we did not suffer as much as we did going down to Hobart.' George then added, 'However it cured Father of any inclination to settle in Tasmania.' Not surprisingly winters in Tasmania were very different from the climate in India.

After this adventure George's father decided to purchase land at Lilydale in Victoria and George worked with his father for several years as the property was established. In 1874 the rest of the family travelled from England to settle in Victoria and some of George's younger brothers were now available to assist their father. George told his father that he wanted to head north to Queensland to join an outlanding party moving cattle from Queensland. He decided the best way to do this was to travel by ship to a large port in Queensland and then contact stock and station agents to find employment. Unfortunately at this point in the story George stopped writing his memoir so there is a gap in the story.

In Parkes, New South Wales, on 8 January 1889 George married Annie Wilson Hardwick Weston. We know from articles in Trove that, at that time, George owned a sheep station west of Parkes named The Troffs. George's brother Arthur also worked on the property and some of the articles refer to the Hutton Brothers. Arthur was secretary of the Parkes Jockey Club and owned and raced a number of horses.
George and Annie had three children - William Clifton Weston (1889-1893), Eleonora Ruby (1892-1990) and Nancy Hazel (1899-1997). Family stories relate that William loved water and would often disappear. One day when visiting friends William wandered off and his body was found in the nearby creek.
The Troffs until the beginning of the twentieth century. Unfortunately there was a lack of rain in the years between 1895 and 1902 referred to as the Federation Drought. George and his family had to sell the property. A family member purchased much of the furniture. Annie and their two girls went to live in Sydney while George remained in the district trying to earn a living. He eventually became a Rabbit Inspector for the Molongo P P Board.


Rabbits were in plague proportion in rural Australia and rabbit inspectors were required to ensure that property owners were following procedures to reduce rabbit numbers on their property.  Newspapers contained reports of the rabbit inspectors at Molong Pasture Protection meetings such as the following report in Sydney Morning Herald Wednesday 23 December 1914 page 9:


Rabbit InspectorHutton reported that he had travelled 304 miles since the previous meeting, and had made 45 inspections. He reported ten holders to be unsatisfactory, and recommended three owners for prosecution. The board decided to lay poison in reserves at a cost of £25, and to prosecute three holders reported by Inspector Hutton.

The Sands Directories show that George, who was now 76, was a rabbit inspector in the Molong area until at least 1926. The directory entry also noted that he was a JP. Electoral rolls for 1930 and 1936 show that George was living with his daughter Nancy and her family on their property, Metavale, Cunnamulla, Queensland. My mother has memories of an 'old man with a beard' who used to call her, 'My little gal'. He spent most of his time reading or going for long walks.
George Hutton died in Sydney on 5 November 1936 at the age of 86.

George Hutton was my great grandfather.
Posted by Vicki's Blog at 21:32