As Hobart Town grew it became apparent that there was a need for an organised market for people to sell and purchase produce. The following article discusses the need to establish a market.

GOVT. AND GENERAL ORDERS.
Government House, Hobart Town,
Saturday, December 18th, l819.
THE LIEUTENANT GOVERNOR having received a Recommendation from the Bench of Magistrates, that for the Purpose of enabling the Settlers who may be desirous of bringing Produce of any Kind for Sale, into Hobart Town, as well as for the Accommodation of the Inhabitants, a Piece of Ground should be allotted for a Market; a suitable Space will be immediately fenced in at the end of Davey-street for this Purpose ; and as soon as the necessary Arrangements can be completed, the same Regulations will be established as exist in the Market at Sydney. In the mean Time, commencing on Saturday the 1st of January 1820, the Ground will be open for the Admission of all Persons who bring Produce for Sale, and on the same Day in every following Week,

All Boats belonging to Settlers coming direct with Produce for the Market will be permitted to land at the Extremity of Murray-street, on Saturdays from Day- break till Bell-ringing at l0 o'Clock, and to depart till Two in the Afternoon, preparatory to a Wharf being constructed for that Purpose; but no Boats, except those with Produce, and no Boat that has touched on board any Ship, are allowed to land there.

OLIVER SMITH, Overseer in Government Service, is appointed to take Charge of the Market for the present, and will be sworn a Constable. He will take Care that   the Market Ground be clear before Dark; and that no Irregularity of any Kind be permitted, and that all Scales and Weights and Measures be regulated by the Standard.
By Command of His Honor
The Lieutenant Governor,
H. E, Robinson, Secretary.
Hobart Town Gazette and Southern Reporter 18 December 1819

An article in the Critic 17 June 1911 provides information about the original market on the site in 1829 and and the new market that replaced it at the end of 1853. The article also mentions the Seven Stars across the road from the market.


Old-Time Reminiscences.
[By Argo]
The old Exhibition Building is now a mass of ruins, and the lower portion of it near Collins-street has been turned into a stonecutters’ yard. Old timers will recollect that long before it was used for exhibition purposes it was the chief market of the city. The market was erected in Sir William Denison’s day, and it was stated by one of the local historians that Governor Denison was compelled to fill up and drain the market site before he could build upon it.

This statement is incorrect as the place was a market place long before Denison’s time. It was gazetted as such by Colonel Arthur, who was then Governor of the Colony. When one makes an historical statement one likes to back it up by fact, and here is the fact in the form of a government notice dated Colonial Secretary’s Office, October 11th, 1829: - Some temporary difficulties have arisen whereby the completion of the arrangements for the establishment of a market in Hobart Town is impeded. The Lieutenaut-Governor is desirous to afford the inhabitants without further delay so much of the convenience and advantage of the plan as under existing circumstances may be attainable. His Excellency has therefore been pleased to direct that the vacant space at the foot of Collins-street shall be open to the public for the ordinary purposes of a general market, without any charge  of any kind for the ensuing twelve months, at the expiration of which period it is expected that the necessary arrangements for regulating the market dues, weights, measures, stalls, pens, etc., will be completed. The want of a market in this town having been long much felt, His Excellency, in order to remedy the inconvenience, has been induced to cause a large piece of ground to be prepared at a considerable expense, he therefore feels assured that in an undertaking wherein the industrious part of the community is interested he will meet with the ready co-operation of the public by the exclusive deposit and purchase of marketable commodities at that place, and that the inhabitants of the town in particular will abstain from buying any articles which may be offered for sale at private houses. Regular supplies, fair competition, and steady prices will thus be promoted, and disappointment and impositions prevented.

To make a long story short, this   old-time market was duly established and constables were stationed there from 7 o'clock in the morning till in the afternoon every Tuesday and Friday, for the protection of property and the preservation of peace and good order. The arrangements for the sale of goods was most primitive, and at first only three sheds and booths were erected for public convenience. These were let for a period of twelve months. No live stock were exposed for sale here, a situation being reserved for this purpose in the suburbs. An old resident who died a few years ago gives a lively description of marketing days on what he terms the "Swamp."  The townspeople used to flock down with their baskets and haggle with the vendors over prices so forth. These were the days of heavy drinking, and the “ pub ” known as the “ Seven Stars,” opposite the market place, did a thriving trade. When the new market was opened in the fifties things were introduced on a more elaborate scale, but towards the middle of the sixties there were very few of the retail sheds left. Several Hobart families made a competence under the roof of what may he termed a heap of blackened ruins, the result of the fire which reduced the building to cinders.

William P Kay, Director of Public Works drew the plans for the New Market. John Arrowsmith produced the lithograph of the plans. I found an image of a copy that had been sold but was kept online for reference purposes. Sections of the drawings are shown below. 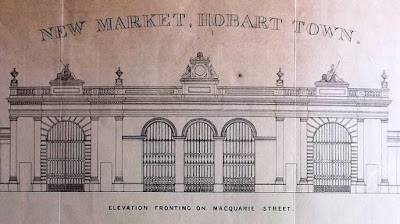 The market buildings were constructed by convicts.

The New Market was destroyed in a fire on Thursday 4 November 1909. The following information in The  Mercury 6 November 1909 discusses the financial loss of the building.

LOSSES AND INSURANCES
THE CORPORATION
The Town Clerk, when interviewed yesterday, said that he made a mistake when he stated that the amount of the insurance policy on the building was £8,000. That sum covered a lot of other property owned by the Corporation, but the actual amount of insurance on the building was £2,000. A rental of about £500 per year was being derived from the structure, and its demolition would be a heavy loss to the Council.- He could not say what the building was valued at, as no valuation had been made of it in recent years. The amount of insurance would not in any way compensate for the loss of the building. The Council had not considered what they would do in the future, hut it was probable that they would give consideration to the matter on Monday when they met.

A number of businesses trading in the market building, of course, also experienced losses. Reports on some of the losses were also covered in The Mercury article.


MESSRS. ROBERTS AND CO.
Among the greatest sufferers by the fire are Messrs. Roberts and Co. As stated above, they had stored in the building large quantities of chaff and grain which they were holding for clients, and they also had stored there an immense quantity of agricultural implements in preparation for the coming season. A lot of these implements only arrived by the last boat, and had been placed in the building a few day before the fire. The whole of the machinery and produce were completely destroyed, along with a large quantity of oils, hinder twine, and sundries. When the principals of the firm were interviewed yesterday, , they pointed out that though their losses would be heavy, it was ímpossible to estimate them at present. The insurance policy which was carried was a variable one, rising and falling according to the quantity of the stock held. They did not feel disposed to say how much that policy was, but it would not cover their loss. It is believed that the value of the goods destroyed belonging to this firm amounts to nearly £3,000.

HOBART FREEZING CO.
The business carried on by Mr. F. Pender under the name of the Hobart Freezing Company occupied a considerable portion of the building on the Campbell-street side. The plant was one of the most complete in Australia, and was specially designed to suit Mr. Pender's purposes. The only policy on it was one for £500, and so the fire means a dead loss of £3,000 to Mr. Pender. When spoken to yesterday with regard to the fire, Mr. Pender took his loss very philosophically, and remarked jocularly, "The thing can't be helped, and I suppose something else will turn up." The insurance policy is held by the Commercial Union office.

ABBOTT AND SONS.
Abbott and Sons had a large quantity of farm and orchard produce stored in the building. It was impossible to estimate its value off hand,as an examination of the books will have to be made before any estimate can be formed. A policy of £400 is held over the stuff, but this will not cover the loss.

The market building was also an entertainment area.


THE SKATING RINK.
At the Elite Skating Rink a large quantity of skates and the new floor laid down at the opening of the season were destroyed. The skates were insured for £200, and a similar policy was also taken out on the floor. Mr. Clark, the proprietor of the rink, however, estimates that he had £150 worth of stock in the rink which was uninsured. The City Band is also a heavy loser. The band always provided the musical programme at the rink, and many of the bandsmen were in the habit of leaving their instruments there, instead of taking them home. Some £40 worth of instruments were destroyed, along with about £60 worth of music. This will he a great loss to the band, as there were no insurances on either of the items.

After description of the construction of the building the article concluded with the following paragraph:

As time rolled on, the market saw many ups and downs. At one time it was a second Petticoat-lane, and all sorts and conditions of things were on sale. Later on a portion of it was converted into a municipal bath, but this never paid, and had to he discontinued. In the eighties an exhibition, in the initiation of which Mr. J. G. (now Sir George) Davies took a prominent part, was held, and later on various other industries and amusements have been carried on within its walls. The area, which comprises about an acre and a-half, will always be an excellent asset for the Corporation.

After the fire the land was cleared and the City Hall was built and opened in 1915 and celebrated its centenary last year.
Posted by Vicki's Blog at 22:40