In preparation for another talk about the Olympic Games held in Melbourne in 1956 I now have some more memorabilia relating to the Melbourne Games and to my father. 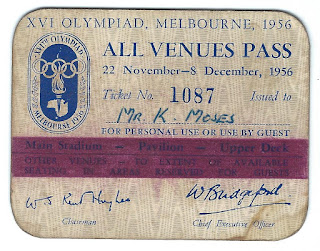 Journalists reporting on the Melbourne Olympic Games were issued with a pass allowing them entrance to all venues during the period of the Games. 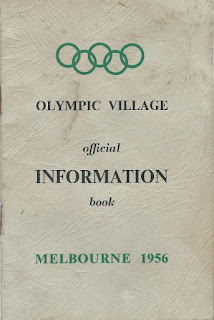 The Olympic Village Official Information Book provides basic information about the accommodation for those those staying at the Olympic Village in Heidelberg.
The information in this booklet provides examples of living in the 1950s with instructions for the use of bath heaters, gas coppers and other appliances. I also thought that it was interesting that steam irons and washing machines were only available in the Women's Quarters. 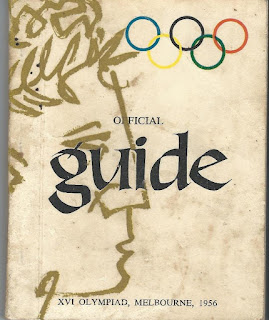 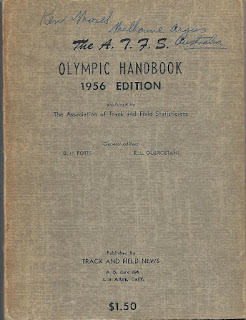 The 1956 edition of The A T F S Olympic Handbook produced by the Association of Track and Field Statisticians was the third edition of this publication. It contains the official world track and field records for events from 1896 until 1952 as well as an all time world list for athletic events stating name,time, place and date event occurred. There is also  list if the world's best performances of all time. 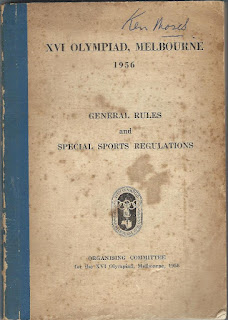 The General Rules and Special Sports Regulations for the XVI Olympiad is a well used publication in my father's collection. It contains a detailed program for all events, maps (including gradients) for events held outside stadiums, general rules relating to the staging of the Games plus detailed regulations for individual sports. 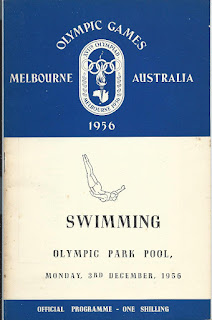 The Melbourne Olympic Games were held from Thursday 22 November to Saturday 8 December. No events were held in Sundays. Programs were produced for each event for each day of competition. So far we have found programs for swimming, cycling and boxing among Dad's collection. I am still looking for the Dad's copy of the program for the Opening Ceremony. 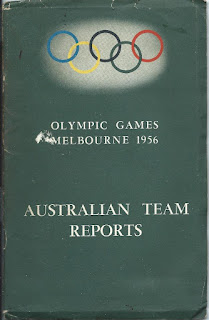 In 1957 a booklet containing Australian Team Reports of the Olympic Games Melbourne 1956 was published. As well as lists of officials there was a general summary report followed by more detailed reports, often with photographs, for individual sports. There was a list of all the Olympic champions for the Games plus a list of Olympic placings by Australian representatives since the first Olympic Games in 1896.


These items, together with information on other posts on the Melbourne Olympic Games in this blog, help tell part of the story of an important sporting event in Melbourne's history.
Posted by Vicki's Blog at 13:31 No comments:


Tracks on the album include:


Maxwell's silver hammer
Oh! Darling
Octopus's garden
I want you (She's so heavy)
Here comes the sun
Because
You never give me your money
Sun King
Mean Mr Mustard
Polythene Pam
She came in through the bathroom window
Golden slumbers
Carry that weight
The end
Her Majesty (a hidden track)

The record studio, Abbey Road Studios, where many of the tracks were recorded located at 3 Abbey Road, may have contributed to the naming of this album but the photo of the four Beatles crossing Abbey Road on the zebra crossing has become an iconic image always associated with the album.

Visitors to the area have their photo taken crossing the Abbey Road crossing. Hopefully local traffic has become accustomed to this activity. Last year when the Australian Over 70s Cricket Team visited Lord's Cricket Ground many members of the team had a go at crossing Abbey Road.

The photo used on the cover of the Abbey Road album.
The music of the Beatles recorded in the 1960s continues to be popular, particularly among those of us who were teenagers at that time. The group holds an important place in the history of modern music.The record album, Abbey Road, remains a featured album in many music collections throughout the world.