Uriah Moses (1780-1847) was transported from England to Australia in 1800. Fortunately his trial for theft was at The Old Bailey and the detailed trial notes are available online. Uriah's life, initially as a convict and then as an emancipist in Australia, is relatively easy to trace however searching for information about his life and that of his family in England is more of a challenge.

A good place to start is FamilySearch which provides a detailed section in their wiki on researching English Jewish Records. This includes a useful summary on the history of Jews in England.

The Jewish section of Cyndi's List also has links that may be useful. Searching by location (England) within this list leads to the British Jewry website.

In the trial notes Kitty Jacobs is called as a character witness for Uriah. Online searching suggests that Kitty Jacobs was Kitty Moses before her marriage. A general Google search for Kitty Moses and Henry Jacobs provides links to a variety of sources which may, or may not, be helpful. One link is to a section of a book, Wealth and Notoriety: the extraordinary families of Lawrence Levy and Charles Levy,  by Robert Ward which includes information about Rebecca, a daughter of Kitty and Henry, marrying Lawrence Levy. Searching for information on other children may also be useful. An entry in WikiTree provides some information about Kitty and her family.

The website, Synagogue Scribes, provides a database of London Ashkenazi Synagogue records, with the emphasis on pre-UK civil registration. In this database is a record of the marriage of Kitty Moses to Henry Jacobs at the Great Synagogue in 1793.

British Genealogy and Family History Forums has a section on queries about the name Moses Cohen / Moshe Cohen. There is also discussion on this family on this forum page (towards the bottom of the page). References in these notes are made to Jacobs Tree website.

Cemetery Scribes could also be a useful resource.

What was it like to be Jewish in London at the end of the eighteenth century?

The Great Synagogue was founded by Ashkenazi Jews. Recent research using DNA suggest that these were largely from European families who had converted to Jewish religion (Live Science 8 October 2013). Many were from Germany and other Western European countries. Additional information can be located in another article in The Scientist 8 October 2013.

As it is believed that Uriah was born in Exeter in Devon it is necessary to look at the Jewish community in that region.

Wikipedia has an article about the history of the synagogue in Exeter which was consecrated in 1764. The synagogue is located in Synagogue Place, Exeter.

A book by Helen Fry - The Jews of Exeter - has been written about the history of the synagogue and was published in 2013.

A paper on Multi-Cultural Exeter 1500-1800 is also available online. It also includes a reference to the book - The Jews of Devon and Cornwall published in 2000. Lists of the names of Jewish families from Exeter appearing in the 1841 and 1851 census are included.

Rabbi Bernard Susser wrote a thesis on Jews of South West England (1977) which is available online on the JCR-UK website.

As I work through these resources no doubt other useful links will also be located. It is unlikely that the links will provide answers to all the questions that will arise but at least they should help in providing a better understanding of the life that Uriah may have had as a Jew living in England.
Posted by Vicki's Blog at 12:53 No comments:

A family member recently remarked how much history was attached to the decorations on our family Christmas tree. 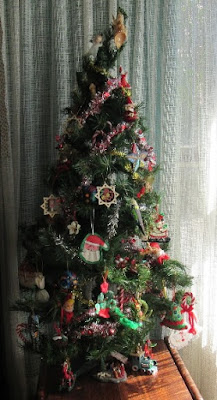 Our first Christmas tree, when we moved to Bayswater forty years ago, was a branch from the pine tree that grew in our back garden. This continued until the tree had to be removed during a severe drought. Since then we have had this small synthetic tree which stands on a table in the corner of the lounge room. At the end of Christmas every year I say that next year I will purchase a new Christmas tree, however this tree has character even though I may need to add a little wire from time to time to hold branches in place. 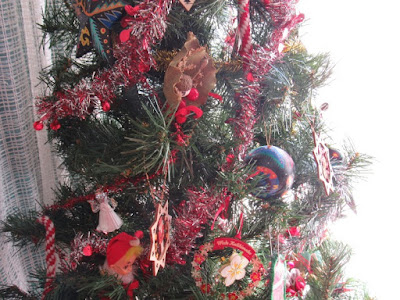 A selection of decorations on our tree including macrame candy canes, a felt elf from my time in Canberra in 1969, glass angels and wooden decorations from Europe, a metal decoration from Hawaii plus an assortment of decorations purchased from the Oxfam shop. The photo below also includes a hand print Santa. 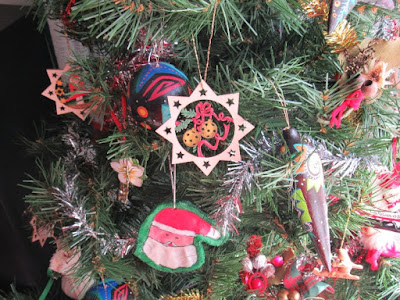 At the top of the tree are a number of special decorations. 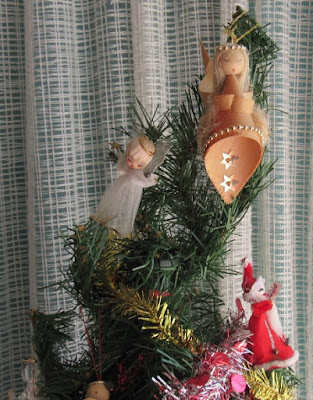 At the very top of the tree is a wooden angel that my son purchased at the Nuremberg Christmas Market when he was an exchange student in Germany. The other angel was one that I always liked on my grandmother's tree. The St Nick below the angels also was one of my grandmother's decorations.

The plastic Nativity scene was given to me when I was a child and it sits at the bottom of the tree. The star seems to have become detached so some repair work will need to be undertaken.

Special decorations do not have to be old. Several years ago when we went on an APT cruise from Budapest to Amsterdam I purchased this Christmas train on the ship. On another trip to Europe I purchased a second train and they are a colourful addition to our collection of Christmas decorations. 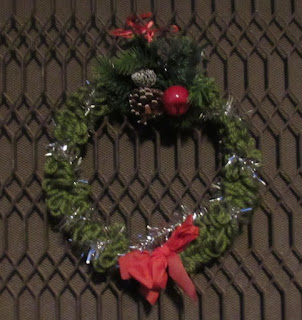 My four year old grandson helped me unpack the Christmas decorations this year and when he found the two Christmas wreaths he correctly told me where the wreaths are normally hung. He also supervised me when I attached one wreath to the front door to make sure that I did it properly. This is an example of how family Christmas traditions continue.
Posted by Vicki's Blog at 21:16 1 comment: