The work of the WCTU was divided into a number of departments. The following list shows the breadth of interests of the WCTU members. WCTU departments in 1891 included:
During the twentieth century drinking fountains were erected throughout Victoria to provide an alternative to alcohol if people were thirsty. 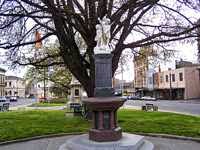 A number of these fountains exist today as marble and granite monuments such as the one in Sturt Street, Ballarat (1902) 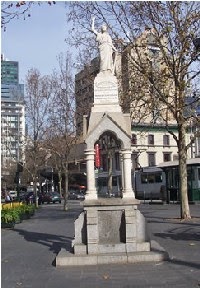 and in Elizabeth Street, Melbourne -opposite the Queen Victoria Market (1902). 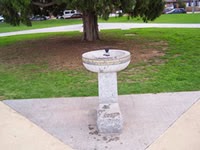 The symbol worn by members of the WCTU was a white ribbon representing Purity. The motto of the WCTU was For God, Home and Humanity. A central theme in the work of the WCTU was the importance of home and family life. The WCTU members were concerned with any issue that impacted upon the welfare of the family. With the large number of hotels and liquor outlets in Victoria in the 1880s and 1890s there was concern that the ready availability of alcohol resulting, in some cases, in alcoholism, could lead to violence and a reduction in family income and was therefore a threat to family life.

The WCTU also supported the empowerment of women. Women were encouraged to become involved in social issues affecting the general community. The WCTU also generally supported the right, particularly of unmarried women, to earn a living. The role of women, especially opportunities in the workforce was changing in the 1890s.

The WCTU branches throughout Victoria held regular meetings to discuss issues and plan action. Members could also attend the annual WCTU convention held in Melbourne. Public meetings were also organised with speakers such as Mrs Harrison Lee promoting the message. Leaflets on issues such as the dangers of alcohol or the need for woman suffrage were circulated among the members or distributed in public places such as railway stations.

The press was utilised to promote the message relating to temperance and woman suffrage. The major organ for the temperance organisations was The Alliance Record which regularly reported any news regarding the work of the temperance movement in Victoria. Verbatim reports from conferences and meetings were printed as well as commentaries on articles published by the daily press such as the Argus and the Age newspapers. Branches were encouraged to have reports of local meetings published in local newspapers.

Petitions were used to canvass public opinion on issues and the members used this tool on a number of occasions. Collecting signatures for the Woman's Petition allowed the members of the WCTU to also promote the work of their organisation to a broader public.
Posted by Vicki's Blog at 19:37