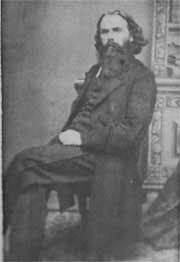 Simeon Lord was born in Sydney in 1810, possibly on the 9th or 19th of May. His parents were Simeon Lord and Mary Hyde who had both come to Australia as convicts. Records show that he was baptised in 1810. Simeon had two older sisters and seven younger brothers. He also had a half brother and sister, his mother's children from a previous marriage. His father had also adopted a young girl, Joanna, whose parents had died when she was four. Consequently Simeon was a member of a large family. Simeon's father had had at least a basic education in England and he would have ensured that his children would have schooling in Sydney.

By the time Simeon was born, Sydney had been established for 22 years and was now a busy community. His father was an active figure in Sydney life and had amassed a good income as a trader, involvement in the sealing industry, manufacturing a variety of goods and had acquired grants of land in Sydney and other parts of New South Wales. His business interests had also extended to Tasmania and in April 1826, at the age of 15, Simeon junior was off to Tasmania to oversea his business interests in that colony. Articles in Tasmanian newspapers sometimes included the names of Simeon Lord and Thomas Birch in the same articles. Both men had similar business interests so this may have been how Simeon junior met the Birch family. Advertisements in newspapers show that once in Tasmania Simeon was engaged as a trader selling a variety of goods. He also began looking after his father's properties.
On 15 June 1831 Simeon, now aged 21, married Sarah Birch at St Matthew's Church, New Norfolk. (Marriage Record in Linc)

They lived on the family property, Bona Vista near Avoca south of Launceston. Bona Vista was primarily a sheep property consisting of 9767 acres on the Esk River. When the property was advertised for sale in 1862 the house was described as a 'family residence most charmingly placed, with numerous domestic offices, large barn, stable, coach house, cattle shed, and out offices all most substantially built of freestone, and enclosed in stone walls; in fact, the whole premises having been laid out by the present proprietor for his own residence and occupation, may with confidence be said to possess every requisite for a first-class establishment.' (Launceston Examiner 4 January 1862) The family also owned two other properties in the district, Grayfort and Emu Run. The additional properties, including a blacksmith's in Avoca, were let out to tenants.

Articles in newspapers help to construct a picture of life at the time. The Cornwall Chronicle 2 December 1843 described a social event - 'On the 23rd instant a ball and supper was given by Simeon Lord, Esq., at his residence, Bona Vista, when all the beauty and fashion of the district were present. The party were much pleased with the entertainment, and broke up soon after daylight.'
Simeon placed a number of advertisements in newspapers advising that, 'Ajax, a handsome dappled grey horse, sixteen hands high, will stand for the ensuing season at Bona Vista, Avoca. This horse combines activity with great strength, and his stock is highly approved of, being considered well adapted for carriage horses....'
Roaming stock caused a problem and from time to time advertisements appeared in the newspapers listing animals, often cattle, that had strayed on to properties and were now impounded and would be sold unless claimed.

Simeon employed many men, including ticket-of-leave men, to work on his properties either long term or for seasonal work. In 1844 he placed an advertisement directed towards farm servants - 'Wanted an active single man, as foreman or working overseer, who possesses a practical knowledge of agriculture, and the management of stock, and who has had considerable colonial experience. Testimonials required. Also, three ticket-of-leave men, for farming.' In November 1848 he needed shearers -'Wanted 10 good shearers, to commence on Friday the 8th of December next.'

There could also be also danger living on large properties. On 6 January 1853 bushrangers, James Dalton and Andrew Kelly, arrived at Bona Vista and herded all the occupants into one room where they proceeded to collect amounts of cash and items such as watches and jewelley. When the watch house keeper and two constables arrived at the property Thomas Buckmaster, the watch house keeper, was killed and one of the constables was shot. The bushrangers acquired additional horses from the property before departing to rob other properties in the area. Most members of the Lord family was in Hobart at the time of the incident, though the paper reported that Frank Lord (Francis) was present and was ordered to get horses for the bushrangers. The Tasmanian newspapers contained detailed descriptions of the raid and subsequent trial when the bushrangers were captured.

Simeon Lord senior was well known for going to court to sort out his problems. Simeon would have learned from his father's experience so when there was considerable delay in settling the will of his father-in-law, Thomas William Birch, Simeon took the matter to court on behalf of the family to have the problems settled so that the land holdings could be sold with the proceeds divided among family members.

Simeon and Sarah had eleven children - two daughters and nine sons. One of the sons died at birth while two others died when young children. Most of the children were born at Bona Vista. The boys would all have gained the experience of working on a property and a number of them eventually ran properties of their own, particularly in Queensland. Their parents also ensured that they had an education initially with a governess. At least two of the sons received schooling back in England.

By the 1870s Simeon had decided to relocate north to Queensland and advertisements began to appear in the newspapers for leasing and later selling the Tasmanian properties. Some of his sons, including Frederick, had already moved to that colony. In Queensland Simeon had started to purchase properties. In March 1874 the Cornwall Chronicle reported that 'the Tasman s. s. ... took ten horses for Mr Simeon Lord, en route for Queensland, some of which were choice draught brood mares from the northern districts.' Properties purchased included Eskdale on the Darling Downs and Culloden West Station. Cattle were often moved from one property to another as noted in The Queenslander on 28 July 1877, 1000 cattle, belonging to Mr Simeon Lord, bound from Eskdale to Culloden, on the Thomson, crossed the Warrego at Caroline on the 4th.' In April 1875 the newspapers reported that Simeon had purchased Barataria No. 2, 100 square miles; St Mungo, 60 square miles; Culloden, 99 square miles; Glenullin, 90 square miles; St George, 100 square miles; Lochiel, 100 square miles; St David, 100 square miles and St Andrew, also 100 square miles. There are also reports of Simeon acquiring other properties.
Simeon and Sarah owned Highmead in Upper Roma Street in Brisbane where they spent much of their time, especially in their later years. An article about Highmead appeared in The Queenslander 18 June 1931 including a copy of the above photograph. A number of alterations were made to the house by new owners after it was sold in 1894.

Simeon Lord died at Highmead on 15 June 1892. His obituary in The Mercury 28 June 1892 read: Another old resident has passed away Mr Simeon Lord, one of the oldest residents in Tasmania. He was the owner of various properties in Tasmania, including a choice estate at St Helen's, George's Bay, and many other good pastoral estates. In Queensland he owned much station property, and was throughout life a methodical, shrewd, and prosperous man of business.'

Sarah had died in Sydney when visiting family in January 1892 and had been buried at Dobroyd Cemetery. Simeon's body was taken to Sydney to be buried with his wife.