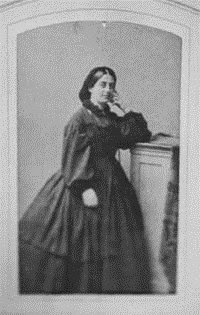 Hobart Town in Van Diemen's Land (later Tasmania) had only been established 10 years previously so was still a small, but busy, community when Sarah was born. The economy of the colony depended on sealing, whaling, timber getting and trade with Sydney, England and India. Thomas Birch was involved in all these activities and was becoming a wealthy man. The year after Sarah was born her father had built Macquarie House, a three story brick house in Macquarie Street. As many of the other buildings in Hobart Town were still wattle and daub structures, Macquarie House was a prominent building. As well as being a family home, Thomas stored and sold cargoes of merchandise that had arrived from overseas.

When Sarah was seven years old her father died leaving her mother with six children aged between twelve and one to look after. Although the family was well off there were complications with Thomas' will and the large amounts of land available owned by the family could not be sold until 1839.  An advertisement appearing in the newspaper shortly after the death of her father showed that Sarah's mother was attempting to carry on the family business. In March 1822 Edmund Hodgson arrived in the colony and newspaper advertisements shortly after his arrival show that he began selling goods on behalf of Sarah Birch.

On 23 November 1823 Sarah's mother married Edmund Hodgson. Between 1825 and 1834 six more children were added to the family. As the eldest daughter, Sarah may have helped look after her younger siblings and half siblings until she married Simeon Lord junior when she was 16.

Sarah married Simeon Lord (the eldest son of the convict also named Simeon Lord) on 15 June 1831 at St Matthew's Church in New Norfolk. St Matthew's was built in 1823 and consecrated in 1828. Although there have been many alterations to the church over the years, St Matthew's is Tasmania's oldest church still holding services today in part of the original building.
Simeon's father had business dealings, including grants of land, in Tasmania and his name appeared from time to time in the same newspaper reports that referred to the business dealings of Thomas Birch, Sarah's father. Hobart was a small community and although Thomas Birch was no longer alive when Simeon junior arrived in the colony in 1825 he probably knew of the Birch family. This possibly led to an introduction to Sarah.

Initially Simeon was a trader selling goods and livestock in Hobart. By 1830 Simeon and Sarah were living at Bona Vista, a property near Avoca south of Launceston. This was one of three agricultural properties owned by the Lord family. They also had a house, Vaucluse, in Macquarie Street, Hobart, which they lived in for part of the year. In 1873 they started selling their Tasmanian properties in preparation for moving to Queensland. Many of their children had already moved north and established themselves in Queensland. In Queensland Simeon purchased a number of properties including Eskdale and Culloden, but they also had a house, Highmead, in Roma Street, Brisbane where they spent much of their time.

Education of the children appears to have been an important part of their upbringing. In 1849 Sarah placed advertisements in newspapers for 'a respectable young lady as governess' for the children. The obituary for Frederick Lord includes the information that at the age of 10 he was sent to England where he attended Blackheath Proprietary School and then Kings College School on The Strand. In the England 1861 Census the name of Robert S Lord appears on the list of pupils living at the home in Pultney of one of the masters of Kings School. Whether the other sons were also educated in England is not known at present.

No doubt Sarah and Simeon were proud of the contributions made to the development of the colonies by their family members. The boys tended to follow their father's pastoral interests owning large properties, particularly in Queensland, though Edward and Frederick were also Members of Parliament. Robert worked in the goldmines of Gympie. Louisa married William Tully, a surveyor who later became Surveyor General of Queensland, and they had three children. Unfortunately Louisa died two months after the birth of her third child (who also died two months after the death of her mother). Emma married Lieutenant George John Taylor Airey (later Colonel) of the Royal Marines and Royal Australian Artillery and they had six children.

Sarah died in Sydney on 30 January 1892 when visiting her daughter, Emma, and her family. The following report about Sarah appeared in The Brisbane Courier on Thursday 4 February 1892:

A well-known figure is lost to Brisbane society in the person of Sarah Lord, wife of Simeon Lord, of Highmead, Upper Roma-street. She was known amongst a large circle of friends, but more especially in connection with charitable institutions. It is much to be feared that a constant attendance on official duties week after week reduced her failing strength too much before her recent visit to Sydney. In connection with city institutions she was on the committees of the Lady Bowen Hospital, North Brisbane Benevolent Society, the Governesses' Home, and on the committee as vice president of one of these almost ever since her arrival in the colony some fifteen years ago. She was born at Hobart, Tasmania, on the 13th, October, 1814, married 15th June, 1831, and died on Saturday morning last at the residence of her son-in-law, Colonel Airey, Victoria Barracks, Paddington, Sydney. Her loving, genial nature and keen interest in the welfare of her fellow creatures will be sorely missed by a large portion of the community.

Sarah Birch was my great (x2) grandmother.
Posted by Vicki's Blog at 20:55