Once again, notes from an interview, family photographs and the use of newspaper article found in Trove combined to provide information about this part of the family story.


In the interview I did with my mother approximately twenty-five years ago she mentioned that Gran, Grandad, Lortie and Michael lived at Toogoolawah when I was a baby.
They had cows, a few pigs and grew lots of vegetables. Berily was on a tributary of the Brisbane River. The house wasn't much when they went there but it was quite roomy. There was a lovely billiard table table which could be used as a dining room table. ... They found the vegetables were terrific but they weren't getting the right price for them.

The three photographs above show the improvements made to the property over five years. A garden was also created around the house.
Articles in Trove provide information about the change of ownership of the property plus developments made to the property after 1947. The articles also demonstrate the need to be aware of possible alternative spellings of names (Berily / Beriley) in order to locate all the available information.
An article in the Queensland Times Thursday 21 November 1946 page 6 mentioned that Mr Stan Nagel from Berily Farm, Scrub Creek, had returned home from hospital but was still confined to bed. As family photographs show images of Berily in 1947 when the Lord family moved to the farm the sale of Berily probably took place early 1947.

An article entitled 'Left sheep for lucerne on Brisbane River' in the Queensland Country Life Thursday 23 December 1948 page 6 described the crops being grown at Beriley.
Lucerne growing is the main purpose of Berily Farm, Toogoolawah, now owned by Mr. A. B. Lord, who formerly owned Meta Vale in the Cunnamulla district. Like so many other westerners who have moved closer to the city, the Lord family appreciates the convenience of electricity and the availability of water.
Berily Farm comprises 220 acres on the Brisbane River, directly opposite Cressbrook Station, with much of its frontage suitable for lucerne and potatoes. Of 90 acres under cultivation, 35 acres is lucerne. During the warm weather the average has been a cut of a ton to 25 cwt. every five weeks.
The lucerne is mown and carted into the shed and allowed a few days to cure before being baled. When "Queensland Country Life" called, the baler was hard at work. With three men fully occupied, it was estimated that 10 tons would be baled in the day.
The bulk of the lucerne is sent to Victoria Downs, Morven, and already 40 tons this year has been sent out to feed the stud sheep. It is also intended that a reserve of fodder shall be built up on the property to tide over any future dry spells.
Mr. Lord said that he had found that superphosphate applied at the rate of one cwt. to the acre gave a most satisfactory return.


All lucerne is grown under irrigation, and power is supplied to the 3% inch pump by an electric motor.
In addition to the potato and lucerne crops, the farm runs 40 head of A.I.S. dairy cattle, using Chelmer Red Prince as the sire, and the herd includes several pedigreed cows purchased with the aim of building up a strong herd of milkers. All cows in the herd are tested under the new herd recording scheme.


The following year the Queensland Times Friday 24 June 1949 page 4 reported that additional crops were also being grown.
Mr. A. B. Lord of "Berily," Scrub Creek, has commenced growing small crops - carrots, beet and white turnip - for the Brisbane market. At present he has half an acre of carrots, 2 acres of turnips, and half an acre of beet grown under Irrigation. Supplies so far sent to market have met a good demand. 'During the current week, Mr. Lord expects to send 100 bags to market.


Beriley was a mixed farm and dairy cattle and pigs were also part of the farming operations. When Arthur Lord sold Beriley in 1954 the Queensland Times Tuesday 4 May 1954 page 4 reported that the new owners sold the existing stock.
Dairymen from all over the Brisbane Valley and Ipswich attended a dispersal sale of Messrs. R. and F. Moyse's A.I.S. dairy herd conducted by New Zealand Loan and Mercantile Agency Co. Ltd. on the property, "Berily," recently purchased from  Mr. A. B. Lord. The whole herd of 60 head was sold at satisfactory prices which were in advance of those at recent local sales. A stud bull brought £33/12/, cows in profit £24, cows and calves £25, springers to £27/10/ Jersey heifers to £22, and vealers £7 to £10. There was also keen competition for the stud pigs. Brood sows brought £25. AIl surplus farm machinery went at satisfactory prices. In future the holding will be used for fat lamb raising and agriculture.

The Lord family were at Beriley for seven years and during that time improvements were made to the property. In 1949 the Queensland Country Life reported on progress with pumping for irrigation. 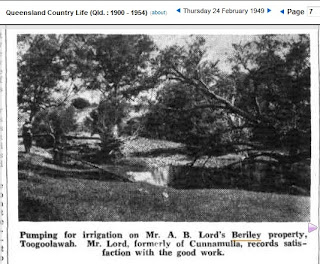 However as the following photograph shows, irrigation was not always needed.
Crops of carrots, beets and onions disappeared under the flood waters. The trees show where the river banks should be.