Recently I received an enquiry as to whether I had any additional information on the Olympic Choir that performed at the Olympic Games in Melbourne in 1956. Some years ago I gave a series of talks about my father's involvement as a sports journalist at the Olympic Games and at each talk people attending often provided additional information about involvement of their family members. At one of the talks I was given information about the Choir that sang at the Opening and Closing ceremonies.

The Official Report of the Organising Committee for the Games of the XVI Olympiad Melbourne 1956 provides come information about the Choir:

The choir was placed in the main outer stand opposite the Royal Box and the rostrum. Immediately in front of the stand was a platform which accommodated the band of the Royal Australian Airforce under its Commanding Officer, Squadron Leader L H Hicks. The choir and band were conducted by Sir Bernard Heinze, Ormond Professor of Music, Melbourne University. The trumpeters of the Royal Australian Air Force band played also the Olympic fanfare for the raising of the Olympic flag. The fanfare was composed for the occasion by Squadron Leader Hicks. (page 226)

After the athletes from all the competing countries had entered the MCG during the Opening Ceremony, the Olympic Hymn was sung by the choir, accompanied by the band. The Dedication Address followed before the choir sang the Hallelujah Chorus. The flag bearers from competing countries formed a semi-circle around the rostrum where the oath was taken by John Landy. The National Anthem was played by the RAAF band and sung by the choir before the teams left the ground. (summary from pages 235-236)

An Australian Rules Football match was held on the MCG before the commencement of the Closing Ceremony. Before the football began the choir and the RAAF band were placed in the position they had occupied for the Opening Ceremony. 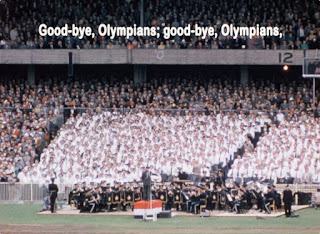 During the Closing Ceremony the Olympic Hymn was sung by the choir while the Olympic flag was lowered. As the athletes left the ground the choir sang the Song of Farewell. Athletes from all nations inter-mingled, some of them walking rather than marching out of the vast Stadium to the lingering lilt of the old bush air and its cry of Good-bye Olympians followed by Will ye no' come back again?, taken up, still with emotional tremor in their voices, by the scores of thousands of spectators.

Sir Bernard Heinze had suggested that the words of Waltzing Matilda should be adapted for the Song of Farewell (page 716).

Homeward, homeward, soon you will be going now;
Momok wonargo ora go-yai,
Joy of our meeting, pain of our parting,
Shine in our eyes as we bid you good-bye.

Good-bye, Olympians; good-bye Olympians,
(On comes the evening, west goes the day.)
Roll up your swags and pack them full of memories,
Fair be the wind as you speed on your way.

Blessings attend you, Fortune befriend you,
All good go with you over the sea.
May the song of our fathers - 'Will ye no' come back again?'
Sing in your hearts thro' the years yet to be.

Come to Australia, back to Australia,
(Mist on the hills and the sun breaking through)
With the sliprails down and the billy boiling merrily,
Wide open arms will be waiting for you.