I recently gave two more talks about the Melbourne Olympic Games where I have met many people with memories and family involvement with the games. 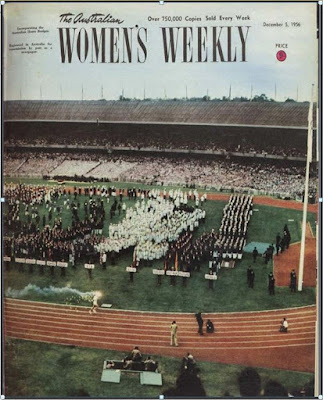 He was a member of a combined community choir - the Melbourne Olympic Choir - that sang at the 1956 Melbourne Olympic Games. Lloyd gave me notes that he had written about his experiences with the choir which consisted members of community choirs throughout Victoria. As well as singing at the Opening Ceremony the choir performed at a number of events including the Closing Ceremony.

Other people at the meeting were Betty who, as a member of the St John's Ambulance Brigade, attended many of the events working with that organisation.
Presentation books showing pictures of Melbourne and surrounding areas were presented to members of the Olympic Committee who would eventually vote for the city to host the 1956 Olympic Games. Three special invitation books with lambs’ wool covers decorated with jewels were presented to three people including the King of England and the President of the OIC. Other copies were also covered with lambs’ wool and decorated with an enamelled emblem. Copies were also covered with suede plus enamelled emblems. The books were presented to member of the International Olympic Committee in 1948 and also to local supporters of the project. The company that printed the books was Spicers & Detmold in Coburg and one of the ladies present at the meeting was a daughter of one of the printers who made the books.
The Melbourne Invitation Committee extends a most cordial invitation to the esteemed International Olympic Committee to celebrate the XVI Olympiad in Melbourne, Australia, in 1956.
A second book, published as a supplement to the first book, was published in January 1949 and was posted to all delegates of the Olympic Committee who would decide who would host the Games in 1956.

Another lady told us that her mother helped make the presentation cushions used for medal presentations at the Melbourne Olympic Games.

When we were discussing who attended any events at the Olympic Games one couple laughed and the husband said that he went to the Closing Ceremony because the soccer final was played before the ceremony and he is a soccer fan. Meanwhile his wife stayed home and looked after the baby.
Another connection to the Melbourne Olympic Games was one lady who said that she trained in athletics with Betty Cuthbert. At the Melbourne Olympic Games Betty Cuthbert won the 100m and 200m and was in the Australian 4 x 100m relay team which also won gold.
The water polo incident in the Hungary and Russia  match was also mentioned in the game. The book by Harry Blutstein, Cold War Games, covers this unfortunate incident. This incident was later referred to as 'blood in the water'.
At the second talk the father of one lady was involved in the printing of the tickets for the Melbourne Olympic Games. 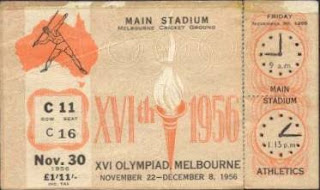 The three talks that I have given have provided additional information about the Melbourne Olympic Games.
Posted by Vicki's Blog at 18:45