In June 2013 Lloyd Jenkins wrote an account of his memories of his experiences of being in the Melbourne Olympic Choir in 1956. Lloyd gave me a copy of his notes in 2019. Below is a summary of Lloyd's experiences with the choir.

Twenty-four year old Lloyd Jenkins was one of the ten members of the Ballarat Choral Society selected to take part in the 1,200 member Melbourne Olympic Choir. Lloyd was one of the younger choir members. Choir members were expected to attend the four rehearsals held in Melbourne over several weeks before the Games began. Lloyd  travelled from Ballarat to Melbourne on a 1952 BSA 250 motor cycle.

The first rehearsal was at Wilson Hall, Melbourne University. The choristers sat in blocks - 600 sopranos, 200 contraltos, 200 tenors and 200 bass. On arrival they were told the pieces that would sing at the Opening and Closing ceremonies and eventually the appropriate sheet music was distributed. The choristers were also told that attendance at rehearsals was compulsory and a cardboard choir pass was issued with holes to be punched in it at each rehearsal. Squadron Leader Laurie Hicks was the rehearsal leader.  Eventually the choir would sing with the RAAF band but for this rehearsal they were accompanied by a pipe organ. At the first rehearsal the choir learned the Olympic Hymn.

Rehearsal number two was held at the Royal Exhibition Building where the choir members were seated on raked seating and were accompanied by an electronic organ. At this rehearsal the choir rehearsed the five items to be sung at the Olympic Games - God Save the Queen, the Halleluja Chorus, the Olympic Hymn, Waltzing Matilda (with new words) and Will Ye No Come Back Again?.

Back to the Exhibition Building on 9th November for rehearsal number three and this time the choir was able to practise with the RAAF band.To quote Lloyd, 'A choir of that size with a full sized Concert Band performing indoors makes an amazing sound.' For Lloyd, this rehearsal 'was the high point of the whole Olympic Choir experience... The sound within that building was unforgettable.'

On Sunday 18th November the fourth and final rehearsal was held at the MCG. This time 'Sir Bernard Heinze took the podium, a small platform there on the grass, facing the Band and the Choir.'  As Lloyd noted, 'the singers needed the experience of performing in that particular setting, mainly to build up confidence at pressing on against their own amplified sound from around the whole complex'. This rehearsal was not just for the band and the choir - 'the sound engineers and radio broadcast teams needed the experience as well'.

Thursday 22nd November 1956 was a warm sunny day in Melbourne - perfect for the Opening Ceremony. For Lloyd, 'perhaps the biggest moment was to see Australian Junior Mile Champion, Ron Clarke, enter the arena carrying the Olympic torch.' In summing up the day he concluded that the '110,000 spectators, and athletes, and the various officials and performers all had a day to remember forever.' 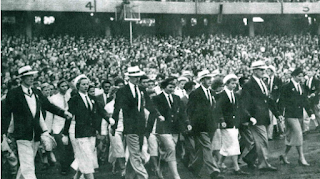 Traditionally at opening and closing ceremonies, teams entered and left the arena as separate nations however in Melbourne at the Closing Ceremony the athletes entered the stadium mixed together. They left in the same manner, walking, not marching. 'As the athletes left, the choir was singing its way through Waltzing Matilda and Will Ye No come Back Again?, two songs of farewell.

We went straight from one into another, no break at all. Not all the athletes had left the Arena when the two songs were completed.' The conductor signalled for the songs to be repeated. As the words to the songs were printed in the  programme, 110,000 spectators gave full voice to their emotions as they sang with the Choir and the Band. 'A huge wave of emotion swept across the Stadium as the people sang and waved, and as the athletes marched and sang and waved.'

'Magic moments like that take on a life of their own and any person who was there that day will understand what I am trying to describe' concluded Lloyd.

This account by Lloyd Jenkins of his experience of being a member of the Melbourne Olympic Choir at the Olympic Games in Melbourne in 1956 demonstates the ability of the power of music to add to the atmosphere of an event.