One of the projects during this period of social / physical isolation is to begin compiling information about the family history. Last term my seven year old grandson was asking questions about the convicts when he discovered that we have twelve convicts in our family including two who came on the First Fleet.

Today I decided to revisit the database, British Library Newspapers, which can be accessed from the website of the State Library of Victoria by those with a library card. Other major libraries will probably provide a similar service. The database provides access to digitised copies of articles published in Britain from the 1700s.


Clicking the images below will provide a larger image.

The First Fleet left the Motherbank, Portsmouth, on 13 May 1787. From the beginning of the year convicts had left the gaols in which they had been imprisoned and loaded into wagons for the journey to Portsmouth. The Chelmsford Chronicle March 2 1787 carries a short report from the House of Commons, 26 February 1787.

On 7 May 1787 the Hampshire Chronicle added the following information about new convict arrivals aboard ships.

The following information about the ships at Portsmouth was provided on March 19 1787 in the Hampshire Chronicle. The paragraph in Home News listed the names of the ships that would be sailing to Botany Bay and also noted the captains of each ship and number of convicts and others on the vessels. 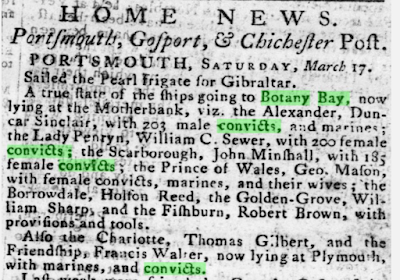 The Norfolk Chronicle reported on May 12 1787 that the fleet was ready to sail the next day.

A report dated 13 May appeared in the Northampton Mercury May 19 1787 that the ships had sailed that morning. The frigate, Hyaena, was to accompany them for the first part of the journey.

The Hereford Journal May 17 1787 announced that the ships had sailed for Botany Bay.

A report on the initial progress of the fleet appeared in the Norfolk Chronicle May 26 1787 providing a quote forom a letter from Plymouth dated May 16.

Another short report in the Leeds Intelligencer May 22 1787 provided the coordinates of the ships when last sighted.

Over the ensuing months the newspapers provided information about the progress of the fleet either when a ship arriving in England reported a sighting of the ships or carried letters from First Fleet ships' officers.

The Hyaena brought a letter from an officer of the Friendship dated 20 May. A summary appeared in the Northampton Mercury 9 June 1787.

Another report appeared in the Northampton Mercury June 30 1787.

The Hampshire Chronicle 30 July 1787 published part of a letter dated June 5 from Teneriffe written by an officer. 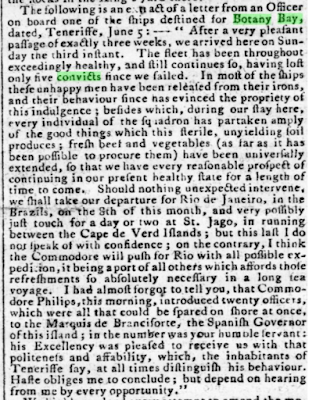 The ships of the First Fleet arrived in Rio de Janeiro in August to restock the food supply. This information appeared in the Stamford Mercury November 30 1787.

These snippets of information provide useful information on the commencement of the First Fleet voyage.
Posted by Vicki's Blog at 18:30