The Test Cricketer in the family

Henry Moses (normally known as Harry) was born on 13 February 1858 in Windsor, New South Wales. He was the eldest son of Henry Moses (1832-1926) and Anne Primrose (1833-1923). Both of Harry's grandfathers (William Roberts and Uriah Moses) had been convicts as was one of his grandmothers (Kezia Brown). Two of his great grandparents had also been convicts (Charles Daley and Susannah Alderson). However by the time Harry was born this part of his family history would not have been referred to and may not have been passed down to that generation, even though many of his peer group born in Windsor would have had a similar background.

Harry's father, Henry, was a successful businessman and a politician. He was the director of a number of companies and owned several large properties. Henry was a founder of the Hawkesbury Race Club and the family maintained their interests in racing, including the breeding of racehorses. He was also interested in cricket and no doubt encouraged his son, Harry, in his cricket career.
Harry played cricket for the colony of New South Wales and was captain in the 1889-90 season and again in the 1893-94 season. The following report about Harry was published in the Australian Cricket Album in 1898. The complete album can be viewed online.


Henry Moses, who was born on February 13, 1858, is one of the finest batsmen New South Wales, or for that matter, Australia has had. He played practically no cricket as a lad, but when he did take up the game, quickly came into prominence, and for many years was the most reliable batsman in his colony. In the seasons of 1886-87 and 1887-88 he made many remarkable scores, notably 297 not out in the latter season against Victoria, which is next to W. L. Murdoch's 321, the highest score of an Australian in a first-class match. Moses, though repeatedly asked, was never, owing to the claims of business, able to join an Australian Eleven to tour England, but he distinguished himself in Test Matches in Australia. He was a left-handed batsman with a wonderfully sound defence, and his strokes, particularly one to the leg, were executed with remarkable precision and safety. He was a very popular player. 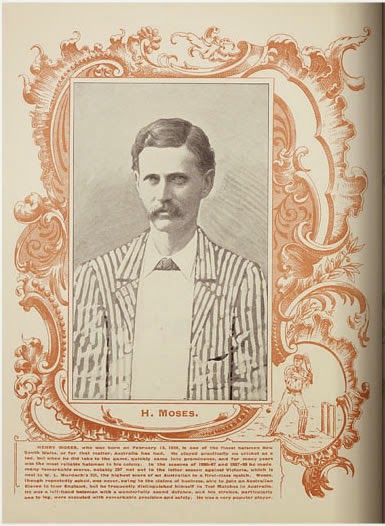 Harry made his test debut for Australia on 28 January 1887. He played six test matches. A summary of his test career. Exploring Trove provides a number of reports of cricket matches in which Harry played.

When my son visited the Bradman Museum some years ago he found the fob watch presented to Harry Moses on display. 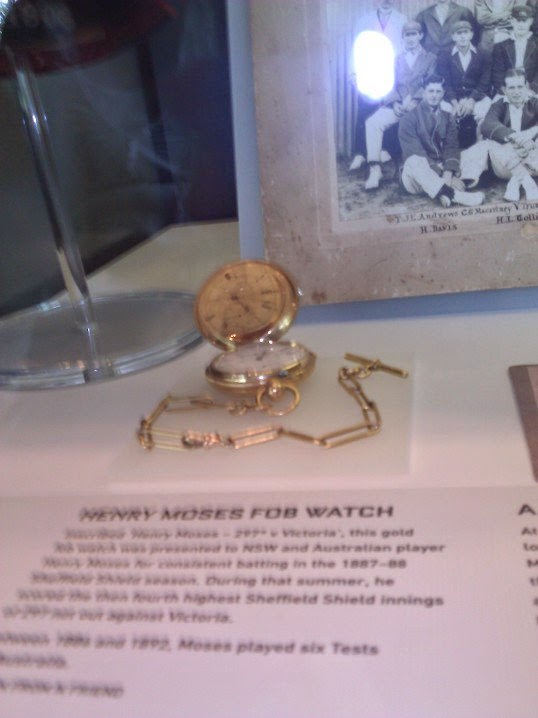 Harry was later involved in cricket administration in New South Wales. He was appointed a member of the Sydney Cricket Ground Trust in 1907 and he was chairman from 1928 until his death in 1938.

Harry continued to play cricket socially for many years but also played lawn bowls in New South Wales teams. In 1905 he played in a bowls competition in Adelaide where one of his team mates was Alfred Percy Lord.

Harry Moses was a first cousin of my grandfather.
Posted by Vicki's Blog at 17:36