Family connections with the Melbourne Cup

The Melbourne Cup is known as "the race that stops the nation". Currently held on the first Tuesday in November, the Melbourne Cup (first run in 1861) was initially run on a Thursday but in 1875 it was changed to a Tuesday (except for 1942, 1943 and 1945 when it was run on a Saturday). Melbourne Cup Day is a public holiday for those living in Melbourne but throughout Australia most people stop what they are doing at 3.00pm to watch or listen to the race. The horses in this handicap race run 32,000 metres and come from many countries. The Melbourne Cup has always been a popular racing event with huge crowds attending the event. 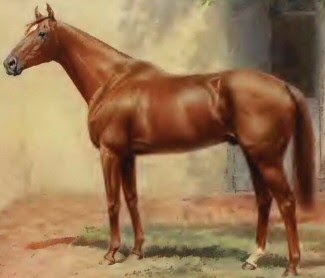 William (Bill) and Frederick (Fred) Moses were sons of Henry Moses (1832-1926). Henry Moses was a son of Uriah Moses (1780-1847) who came to Australia as a convict in 1800. Henry was a successful businessman, landowner and a New South Wales parliamentarian. William and Frederick were both owners of properties in New South Wales. They also bred racehorses, the most successful being Poitrel. An interview with the owners after the 1920 race revealed that the horse had been offered for sale at the Yearling Sales but the reserve price of £300 was not met so the brothers decided to keep the horse themselves. In hindsight this would appear to have been a wise decision. As well as winning the Melbourne Cup Poitrel was second in the Sydney Cup and won the AJC Queen Elizabeth Stakes. Racerate.com provides a record of Poitrel's racing career. Poitrel retired from racing in March 1921 and was sent to the Arrowfield Stud, owned by the Moses brothers, in the Hunter Valley. Arrowfield Stud is now part of the Coolmore Stud. Poitrel died in 1932.

Racing and Sports carries an article about connections of the Moses family with horseracing.

William and Frederick Moses were first cousins of my grandfather.
Posted by Vicki's Blog at 13:21