A conversation with Mr Paterson 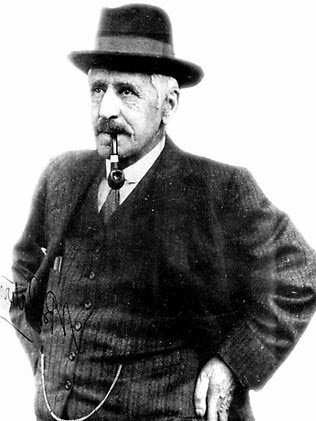 "Son", said Mr Paterson, "if you are going out West, never pass a waterhole without having a clean-up, and if you want to make a success of it, when you meet people, listen to what they have to say and take note of it for future reference. If you do that, you will have a healthy life, learn to appreciate water and you will learn a darned more about the world than you do today. What is more you will meet real men and women. Men and women who are the backbone of this country."

There was no one more qualified to give this advice to a 17 year-old brash youngster who was about to go bush for the first time to make a living and worried like hell as to whether he had made the right decision or not. The place where this sound advice was handed down was the Marble Bar of Adams Hotel in Sydney in 1935. 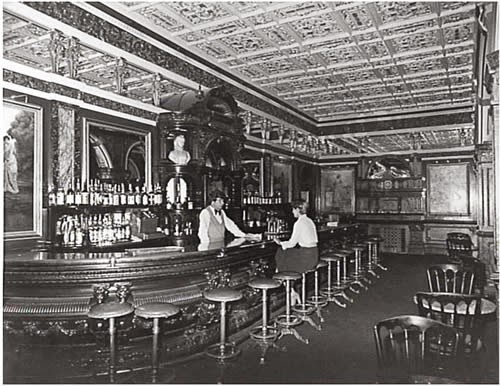 Mr Paterson was known to his colleagues and Australians in general as Banjo Paterson, the bush ballad king, novelist, journalist, war correspondent, and an Australian living legend. He was in his early 70s and looked a young 60. He looked a tough weather beaten bushman who somehow seemed uncomfortable and out-of-place in a crowded city bar, although it was a countryman's bar, surrounded by oil paintings, but as Mr Paterson pointed out liberally sprinkled with con-men and phonies. His face had that permanent tan I was to get to know in the years to come. A tan only obtained from years out of doors exposed to all the tantrums of nature from the fierce unrelenting sun in a cloudless sky, blinding biting dust storms and occasional pelting stinging rain.

He had that wizened squinting look of the stockman and the way he sucked at his short stemmed beloved pipe under his grey bushy moustache, it was easy to picture him sitting on the stockyard rails or hunched alert in the saddle tailing a mob of cattle along an unfriendly stock route. The instant you met him, you immediately realised the man who had written The man from Snowy River, Mulga Bill, Clancy of the Overflow, the words of Waltzing Matilda and other bush classics, had really lived the life he wrote about. He was most sincere and spoke in a slow deliberate manner. Every word he uttered made sense. He told me that I was doing exactly what he had done more than 50 years before. He had been born in the country near Orange and had been brought up early on his father's properties around Yass, had been educated at Sydney Grammar, been articled in a law firm, rebelled against city life and made for the back of Queensland at my age.

That gave me a great deal of confidence as he looked a pretty healthy specimen puffing away at his pipe, which was failing to respond to the puffing.

My father had arranged this meeting with "the living legend of the outback". They were literary acquaintances. Dad was editor of Smith's Weekly and Mr Paterson was a Bulletin man. When I had broken the news to Dad that the city life was not for me and I wanted to go bush he immediately arranged for the meeting. If he had thought that a few home truths about the back country was going to make me have second thoughts his tactic backfired. After our lengthy yarn that day nothing would have stopped me, even if I had had to carry a swag.

Banjo Paterson spoke as he wrote, real down to earth common sense and the advice he gave me was invaluable. I followed it with the best of my ability and was never able to prove him wrong. He told me simple things in that bar at Adams, but things I was never to forget and to thank him for. Things like if I wanted a cool drink, to ride my horse as far as I could into the middle of a dam or creek and fill my quart pot as far below the surface as I could. He told me, if possible, not to drink water before lunch camp. "Once you start, son, you can't stop, you get thirstier and thirstier and end up with water poisoning. Also you watch out for greenhead ants, son," he added. He would not elaborate on the last piece of advice but said I would know all about them if I was going into the mulga country.

I felt the effects of a greenhead my second day in the south-west of Queensland and from then on every greenhead that nipped me was Mr Paterson's passport to authenticity. He had definitely been there before me. He told me of the type of people I would meet. There was a Mulga Bill on every property, a Clancy in every outback town and a Saltbush Bill with every droving outfit that passed down the stock route.

The above conversation with Banjo Paterson is from a collection of stories written by Ken Moses about his experiences in outback Queensland before the Second World War. The account is part of a chapter entitled, Banjo Paterson and the Greenheads.
Posted by Vicki's Blog at 22:35