In May 1894 George Moses and his family left Bathurst to live in Sydney. Reg attended the Bligh Street State Public School
and later the Fort Street School. His exam results show that he was a good student. At the Junior Public Examination in November 1904 his marks were first class category for French, algebra and geometry, second class for English and arithmetic and third class for Latin. At the Senior examination in 1906 his marks for French, English and algebra were first class, ancient history, Latin, geometry, trigonometry and conic sections were second class and third class for mechanics. He then attended the University of Sydney where he completed a Bachelor of Arts degree.

Reg started working as a journalist at the Sunday Times in 1911 and later became associate editor in 1913. In 1913 he also became editor of the Saturday Referee, a weekly sporting newspaper. From 1916-1917 Reg was the drama critic of the Daily Telegraph and from 1917-1919 he was publicity manager for J C Williamson's Ltd. In 1919 Reg joined the staff of Smith's Weekly as a journalist and became literary editor in 1921. By 1928 he was associate editor and was editor from 1932-1935. In November 1935 Reg joined the staff of a new publication, The Australian Women's Weekly as an editor. The management of the Australian Women's Weekly took over the Daily Telegraph Reg transferred to that publication as consultant editor. The first edition of the newspaper was published on 23 March 1936. 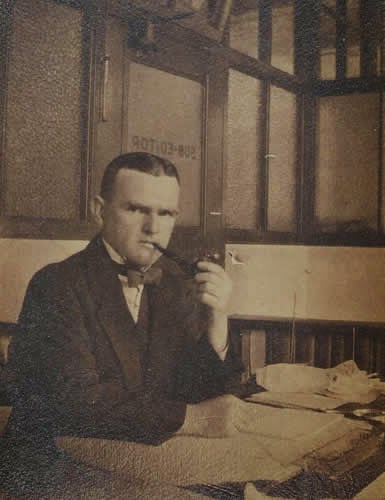 The family lived at a number of locations including Turramuarra, Milsons Point and Killara. From 1933 to 1936 the family lived at 69 Wood Street, Manly.
It was at Smith's Weekly that Reg (or Mo - his nom de plume) became well known, particularly for his humorous articles. In 1920 he became famous for a series of articles that he and two other journalists wrote purporting to be from the Prince of Wales, who was visiting Australia, to his parents. These articles were published on the front page of the newspaper. Although many of the articles he wrote were signed he also contributed to the general running commentary on affairs published.

Fortunately it is possible to find a number of descriptions of Reg. In the book, Remember Smith's Weekly, George Blaikie provided this description of Mo -


A short, round, man, Mo had a very large and distinctive head. Claude McKay had George Finney draw a caricature of Mo's cranium and printed it with the comment, 'A magnificent head for a brain. Offers c/- this office. Please hurry.' A happy little bit of trivia that delighted readers.

The obituary for Reg that appeared in Smith's Weekly stated -


On the personal side, no one could resist Mo's merry smile and his adroit quips. Essentially a good 'mixer', his friendships ranged from vice-royalty to the copy boy. He seemed to know everybody, and the wide world of his friendships was not any more marvellous than their wide diversity. He was as equally at home with the Archbishop as he was with a politician.

Colin Wills in the Daily Telegraph obituary  about Reg wrote -


But outside his acquaintances, and outside his profession, there are many thousands who will miss this man, and will be much the poorer for his passing. For Reg Moses contributed something to the pages of the Australian press that no one else can supply. He was completely individual. He was mature and mellow of mind. He knew men and he understood events. He had tolerance without indifference, humour without buffoonery, wit without superficiality. (4 April 1936)

Through his work on a variety of Sydney publications, Reg worked with Robert Clyde Packer, the founder of the Packer newspaper dynasty, and a friendship developed between the two families.

Mo loved playing golf and was a member of the Manly Golf Club and The Lakes Golf Club.  He also wrote a small humorous book about playing the game of golf - Fore! Pa Golf.
He was also a Freemason being a member of the Literature Lodge. An article written about Reg when he joined the Australian Women's Weekly mentions that he was one of the pioneer administrators of the Boy Scout movement in Australia. Reg was a regular after-dinner speaker at the New South Wales Police Force annual dinner and was generally popular with the police.

Reg Moses died from pneumonia in a private hospital in Manly on 3 April 1936. He was only 46. The funeral was held the following day and was attended not only by members of his family, but by representatives from the Sydney press, the Masonic craft, the police, theatre, golf and business. That so many people attended the theatre at such short notice is a tribute to Mo. The account of the funeral in the Daily Telegraph (6 April 1936) included this description -


Nearly 100 wreaths covered the hearse when the cortege, almost a mile in length and headed by a squad of police motor cyclists, left T Waugh & Co.'s parlours at Manly for the Northern Suburbs Crematorium.

The Sydney Morning Herald (6 April 1936) also had an article about the funeral, listing a selection of the attendees.