Uriah Moses is believed to have been born in 1780 in Exeter, Devon, England although one family story suggested that he came from Pontypool in Wales. All we really know is that at his trial Exeter was given as the place he came from and that Uriah was living in London when arrested. There were a number of Jewish families with the surname of Moses in the Exeter area at the time as well as a number in south Wales, so both locations are possible, however, at present, the general consensus is that he was from Exeter. Jews in south west England, a PhD thesis submitted to the University of Exeter in 1977, provides information about the history of the Jewish community in that part of England.

At the trial in January 1798, Kitty Jacobs stated that Uriah had worked with her husband at their glass shop in Petticoat Lane for three years and that it was three years since he had worked there. This would have made him about twelve years old when he began working with Mr Jacobs. Mrs Jacobs said that Uriah was very honest when he worked with them. Another witness at the trial, Elizabeth Hicks, said that she did not know Uriah but she knew his mother who was a very honest, hardworking woman. When questioned about his whereabouts when the burglary occurred Uriah said that he had been at his father's in Petticoat Lane. This suggests that Uriah had moved to London with his family when he was a young boy.

On the 8 December, 1797, Uriah was arrested for cutting the glass in a window of a draper's shop in Whitechapel and stealing a quantity of the merchandise on display in the window. On the convict records his occupation was listed as glass cutter and he would certainly have had the skills to cut the glass in the shop window. Unfortunately he cut his hand and was arrested at Guy's hospital where he was receiving medical attention for the wounded hand. He was taken to Newgate Gaol where he awaited his trial which was held at the Old Bailey a month later on 10 January 1798. 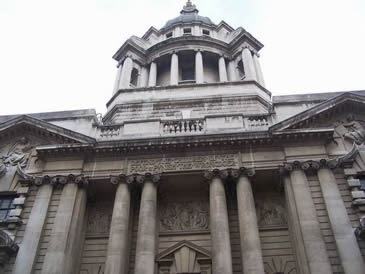 At the trial Uriah was accused of stealing seven silk handkerchiefs, value 30 shillings, thirty yards of lace, value 30 shillings, and fifty-eight yards of calimanco, value 40 shillings from William Holmes, a linen-draper and mercer. Apparently a piece of diamond was found near the window and there were traces of blood on some of the remaining items. After removing the items from the shop he had taken them to the house of Ann Benjamin who was also accused of receiving stolen goods. Ann gave him an old shawl to wrap around his cut hand and told him to go to the hospital. Uriah appears to have kept one card of lace which was found under the mattress of the hospital bed. When questioned about the cut hand Uriah said that he was carrying a teapot when crossing London Bridge and 'tumbled down and cut his hand with the pieces'. Uriah was found guilty and received the death sentence which was later commuted to transportation for life. By this time Uriah was probably 18 years old.
He was taken back to Newgate where he remained for a year before being taken, on 14 February 1799, to Portsmouth where he spent the next fourteen months on the Lion hulk, one of the prison hulks moored in the harbour. The hulks were old, rotten ships, used to house convicts while they waited for a ship to take them to Australia. Eventually Uriah was taken aboard the convict ship, Royal Admiral, which arrived in Portsmouth on 11 April 1800. The ship left Portsmouth on 28 May 1800 and sailed via Rio de Janeiro to New South Wales, a journey that took 181 days. Three hundred male convicts left Portsmouth on the ship but 43 died of gaol fever (typhoid) during the voyage. The Royal Admiral arrived at Sydney on 20 November 1800 almost three years after the Whitechapel burglary.

The next that we hear of Uriah is at the muster in 1806 where he is recorded as working as an assigned convict to George Smith on land in the Hawkesbury area near Windsor. Convicts were often assigned to work for settlers as they served their sentence. In 1812 Uriah received his ticket of leave which allowed him to work for himself, provided that he stayed in a specified area and reported regularly to authorities. On 25 October 1821 he received his conditional pardon. Technically he was free but he had to stay in the colony. As Uriah had begun to establish a new life for himself in Australia and very few convicts returned to England, this was probably not a great issue.

In February 1809 a record in the Colonial Secretary's papers  mentions that Uriah had delivered produce to the Hawkesbury government stores. Uriah therefore had acquired a holding of land in the Windsor area and started growing enough grain to sell some of it. By 1818 Uriah had three acres of land on which he grew wheat, seven acres for growing maize and he owned 14 hogs. By 1819 his land holdings had increased to 12 acres. The Sydney Gazette in the early 1820s listed names of those selling grain to government stores and on 18 December 1823, for example, Uriah delivered 1000 bushels at 3 shillings and 9 pence per bushel. Uriah has therefore established a living growing grain.

The convict census in 1828 lists Uriah's occupation as a baker in Windsor. A book about the history of the Hawkesbury area suggests that Uriah started the bakery in 1821. How he started the bakery business is unknown but it could be seen as a logical move for someone growing grain. Many years later a descendant of Uriah in his published diaries, the artist Donald Friend, mentioned that Uriah had established a flour mill in the Windsor area. However the business developed it must have been successful as for the next 150 years members of the Moses family were engaged in operating bakeries in the Windsor district.

From his humble beginnings Uriah had become a wealthy man. As well as the properties used for growing grain.he appears to have owned a number of properties in Windsor including properties in George Street and Macquarie Street. One of the properties, 68 George Street, still exists today and Roderick Storie, Solicitors have information about the Moses family on their website. The records show that over the years he employed a number of people to assist with his poperties and the bakery. Uriah was also a money lender.
On 9 March, 1830, when he was 50, Uriah married Ann Daley, the daughter of Charles Dayley and Susannah Alderson. Ann was 20 when she married Uriah at St Matthew's Church of England. They both signed the registry with x (their mark). Uriah and Ann had nine children - Frederick Uriah born 1830 died at 8 months, Rachel born in 1831 died when 3 weeks old, Henry (1832-1926), Susannah (1834-1923), George (1838-1908), James born in 1840 and died 6 days later, James Uriah (1842-1892), William (1844-1923) and Thomas born in 1846 and died a month before he turned 4.

We have a description of Uriah from convict records. He was less than 4 feet 11 inches tall, dark complexion, his hair was described as brown in one record and black to grey in a later record. His eyes were recorded as blue in one record and grey in another. Uriah was a Jew and in London he appears to have lived and worked in the Jewish community. In Australia he continued his associations with the Jewish community including donating ₤10 towards the building of a synagogue in Sydney. His family however were members of the Church of England and two weeks before he died Uriah was baptised by the vicar of St Matthews. 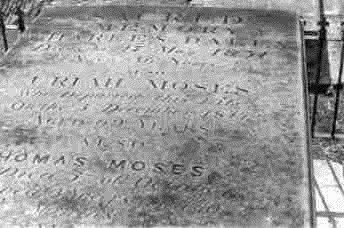 Uriah died on 5 December 1847. He was buried with other family members at St Matthew's Church of England, Windsor on 7 December. There was a brief obituary in the Bell's Life in Sydney and Sporting Reviewer, Saturday 11 December 1847:
Also, on Sunday, the 5th instant, at his residence, George-street, Windsor, after a protracted illness of some   months, which he bore with Christian fortitude, Mr. Uriah Moses, aged 70, leaving a wife and six children to lament their loss. Mr. Moses was one of the oldest hands in the Colony, and universally esteemed by all who knew him. His remains were followed to their last resting place, St. Mathew's cemetery, on Tuesday evening last, by a numerous and highly respectable body of friends.
After Uriah's death the various business concerns remained in the family managed initially by trustees as Henry, the eldest surviving son, was only 15 when his father died. Henry's youngest brother, Thomas died almost three years after his father but the remaining children were well provided for. Probably during Uriah's later life or shortly after his death, the fact that he and Ann's parents had been convicts appears to have disappeared from the family story. I know that my father Kenneth Campbell Moses, Uriah's great grandson, had no knowledge until shortly before he died that he had convicts in his family. A couple of years after Dad's death in1984, a family reunion and a published family history revealed that there were actually eight convicts (including one from the First Fleet) on Dad's side of the family. He would have been so proud of his convict ancestry and their part in the story of the European settlement in New South Wales. Another great grandson of Uriah, Geoffrey Frank Moses did not discover that he had convicts in his family until he received a letter in 1974 seeking information. I have used information from both Geoff's and Dad's research as well as my own research in compiling this brief snapshot of the life of Uriah Moses.

On 4 March 1869, Uriah's widow married James Powell who was described as a gentleman of Randwick. Ann died on 12 June 1880 and was buried at St Matthew's cemetery in Windsor with other members of the Moses family including Uriah

Uriah was my great (x2) grandfather
Posted by Vicki's Blog at 16:48