Mary Bateman was born in England, possibly in London, in 1773 or 1774. There are a number of baptisms for babies named Mary Bateman in these years but at present there is no certainty that any of these are 'our' Mary Bateman.

The 1780s were a time of social upheaval in England. One event which greatly impacted upon the employment opportunities for women was the disbanding of the British Amy returning home in 1783 after the American War of Independence. Many of the former soldiers returned to the cities increasing the population and displacing women from the workforce. Many women who had worked in shops were forced from the workforce to be replaced by men. In 1785 a tax imposed upon the employment of maid servants above the age of 15 also resulted in many young girls and women being left without employment and / or accommodation. For many women living in the cities, prostitution and crime associated with prostitution was the only way to survive. How Mary ended up working as a prostitute we can only surmise. We do know however that after her arrest on 20 April 1788 her life changed dramatically.

Mary Bateman was tried at the Old Bailey in London on 7 May 1788. The day before the trial The Times reported - "There are about 100 prisoners in Newgate for trial at the ensuing sessions, which begin on Wednesday at The Old Bailey". Mary was indicted for "feloniously stealing, on the 19th of April, a silver watch value 3 l (pound) the property of James Palmer, in the dwelling house of Elizabeth Sully ..." The trial summary can viewed on the Old Bailey Online website.

Elizabeth Sully was the landlady of an establishment in Long Alley, off Cable Street, where teenage prostitutes encouraged men to visit and then stole items from them. On this occasion Mary and Elizabeth Durrand (Durant) met James Palmer, who had been spending the evening drinking, and encouraged him to accompany them home. An hour after leaving, Palmer discovered that his watch was missing. It was later discovered hidden in a mattress. Mary was sentenced to seven years transportation. On the committal statement, signed by Mary with an X, her age was given as 15.

Elizabeth Sully was also tried and sentenced to transportation. As Elizabeth Durant had provided evidence she was not tried for her participation. Four months earlier two other girls living and working at the same establishment, Mary Butler and Mary Randall, had also been sentenced to seven years transportation. At the trial the judge had made a point of limiting the value of the stolen watch to 3 pounds - a higher value would have resulted in the death sentence.

After the trial Mary returned to Newgate Gaol. Conditions in the gaol were overcrowded and unhygienic. In the book, The Floating Brothel, Sian Rees describes the conditions -


By December 1788, 151 female convicts were living in three female cells in Newgate, which had been built to house a maximum of 70. They lived on rations fixed for that theoretical maximum and not for the number actually confined. Each cell had one window opening on to an interior well. There were no beds. Instead, there was a ramp at one end of the room with a wooden beam fixed to its top end which served as mattress and pillow. To sleep on the ramp and beam was a privilege, to be paid for weekly. To rent a blanket woven of raw hemp cost extra. Those who could afford neither curled up together on stone slabs awash with saliva and urine. (page 61 Large Print edition) 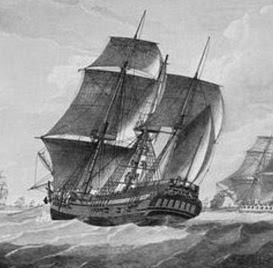 These were the conditions in which Mary lived until 12 March 1789 when 108 females (including Mary) were transferred from the prison to the transport ship, the Lady Juliana - a ship carrying a total of approximately 250 female only prisoners. A report about the ship appeared in The Times 7 February 1889 p3 -


The ship, Lady Juliana, which is ordered by Government to carry over the convicts to Botany Bay, is a fine river-built vessel, and was the first ship that was taken by the Americans on her passage from Jamaica to London, and was afterwards retaken by a man of war, and conveyed to England. One hundred marines are ordered by Government to be raised to go to Botany Bay in the Lady Juliana.

The ship remained on the Thames until early July when it sailed to Portsmouth and then to Plymouth before beginning the long voyage to Australia on 29 July 1789.

Detailed records were kept of the voyage of the Lady Juliana and Charles Bateson's book, The convict ships 1797-1868, and Sian Rees book,  The floating brothel: the extraordinary true story of an eighteenth century ship and its cargo of female convicts, are recommended reading. The ship travelled to New South Wales via Teneriffe, Cape Verde Islands, Rio de Janeiro and Cape Town arriving at Port Jackson 6 June 1790. Only five convicts died during the trip. Bateson suggests that this was because
During the voyage the women had a daily routine which included cleaning the ship and cooking. Some of the women also sewed shirts to be sold when they arrived at the colony.

When the ship arrived  at Sydney Cove the much needed supplies were unloaded first. The convicts were finally allowed on shore on 11 June to stay in the hospital building or huts or tents. On the Sunday they attended a church service where babies born on the ship were baptised.

After a short stay at Sydney Cove many of the women, including Mary, boarded the ship, Surprize, to sail to Norfolk Island where they arrived on 7 August 1790. George Guest had arrived on Norfolk Island  in January 1790 and shortly after Mary's arrival on the island they were living together. They were married in November 1791 when the Reverend Richard Johnson visited the island. Their children for whom we can find records are Sarah born 1792, George born 1794, John born c 1798, Mary born 1803 and William born 1804.  The baby Mary died in May 1804 aged twelve months.

On Norfolk Island George and Mary acquired and farmed areas of land and by 1804 George was reputed to be the largest land owner on the island with holdings of 250 acres and 600 sheep.

When the decision was made to transfer the Norfolk Island settlement to Van Diemen's Land the Guest family volunteered to leave. In September 1805 George Guest and his family were transferred to Van Diemen's Land and settled at New Norfolk. However George felt that he had never received his just entitlements in the land transfer and spent much of his life, including several trips to Sydney, disputing this and other decisions of government officials.

Unfortunately Mary's last years appear not to have been happy ones. On one of the trips to Sydney with Mary and four of the children, George wrote that his disputes over his land entitlements had deprived his wife of her reason and that he had to hire two men to restrain her. In 1828 Mary is recorded as an inmate of the Liverpool Lunatic Asylum in New South Wales where she died in April 1829 and was buried at St Luke's cemetery on 2 April. She would have been 56 years old.

See the post - Mary's Story - for additional material about Mary Bateman
Posted by Vicki's Blog at 20:55