William Roberts is the second member of my family who travelled to Australia with the First Fleet aboard the Scarborough. 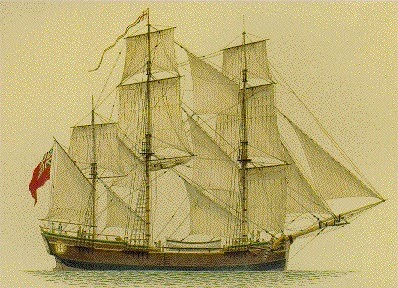 William Roberts was born in Cornwall, England possibly in 1756. Family trees on Ancestry suggest that his father was John Roberts (1717-1792) while his mother was Jane Lugg (1727-1793). They were from St Keverne, Cornwall. The Cornwall OPC Database provides information about birth, death, marriage and other records in Cornwall. On 28 August 1757 a William Roberts (son of John and Jane Roberts) was baptised at St Keverne. On 1 July 1778 at Helston, Cornwall, William Roberts married Mary Russell (1757-1802). They had three children, Mary, William and Robert who was born after his father had been arrested.

In August 1786 a Launceston newspaper reported that at the Bodmin Assizes William Roberts was tried for stealing five and a half pound weight of yarn, the property of William Moffat of Launceston. William was sentenced to seven years transportation. He was a prisoner at the Bodmin Jail which had opened in 1779 so conditions were possibly not as bad as in some of the other gaols in the country. During the day the male prisoners were employed at tasks such as sawing wood, cutting and polishing grave stones or weaving on the prison looms.

On the 25 September 1786 William was transferred to the hulk, Dunkirk, anchored at Plymouth. Hulks were old ships used to house prisoners. During the day the convicts usually worked in chain gangs carrying out tasks such as dredging or working on the roads. At night the convicts slept in an over crowded area between the decks. William remained on the hulk until 21 March 1787 when he was transferred to the transport ship, Charlotte. Ten days later he was transferred to the transport ship, Scarborough. On 13 May 1787 the First Fleet left Plymouth and spent the next eight months travelling to New South Wales. Details of this arduous trip can be found in an earlier post on this blog First Fleet Voyage to Australia.They arrived in Sydney Harbour on 26 January 1788.

Almost two and a half years after his trial William arrived in this new colony on the other side of the world from his family in Cornwall, including a son he probably never saw. He now had to make a new life. Initially the convicts would have lived in tents and later wattle and daub huts. The climate was very different from home in Cornwall. Apart from anything else the seasons were back to front. Arriving in New South Wales in the middle of summer would provided a challenge to the convicts and soldiers in the new colony. The ships had brought provisions but it was necessary for crops to be planted to sustain the colony and herds of animals to be developed from those brought out on the ships. The land around the first settlement proved unsuitable for the growing of crops so it was necessary to look for better land that could be used for farming. There was a shortage of skilled labour among the convicts required to build the new settlement. So far no record has stated William's occupation in Cornwall but he may have possessed some carpentry skills as family stories suggest that he had worked in this field in his first years in the colony.


William's seven year sentence ended in August 1793. Convicts were allowed to remarry after seven years separation from their former spouse so on 14 August 1793 William married Kezia Brown, a convict who had arrived in New South Wales with the Second Fleet. They were married at St Phillip's Church in Sydney by the first clergyman in the colony, Richard Johnson. William and Kezia already had two children, William and Mary, and then added a further eight children to the family, Sarah, James, John, Robert, Maria, Harriett, Ann and Edward.

Like many of the convicts, William appears to have had little formal education - when he signed his will he signed it with his mark - however this was not a barrier to making a successful living in the colony. Once he was free, William became a farmer. On 8 January 1794 he received a grant of 30 acres of land near Sydney. In September 1800 he sold the land for sixty pounds. In 1796 William Roberts received, from Governor Hunter, a grant of 50 acres of land in the district of Mulgrave Place (near Windsor). Initially William rented some of this land to other settlers thus earning additional money to support his growing family and purchase additional land. In June 1809 William purchased 50 acres from Thomas Hobby. The land was known as Hobby's Farm. He later purchased additional land in the town of Windsor. By all accounts William made a success of farming. The General Muster of 1822, two years after his death, described Hobby Farm as comprising of 20 acres of wheat, 8 acres of maize, 6 acres of barley and half an acre of potatoes. Half an acre of the property was devoted to a garden and orchard. The rest of the land was pasture. At the time of the muster there were 40 cattle and 50 pigs.

William Roberts died on 14 February 1820 aged about 64. He was buried at St Matthew's Anglican Church Cemetery in Windsor.