Amy Johnson Crow decided to include in her blog, No Story Too Small, a blog post each week for a year about an individual ancestor and issued a challenge to other bloggers to do the same - 52 ancestors in 52 weeks.
I am a few weeks behind but Australia Day seems a good time to start a similar project. On 26 January 1788 ships of the First Fleet sailed into Sydney Harbour. Two of my ancestors were aboard those convict ships - George Guest on board the Alexander and William Roberts aboard the Scarborough. George Guest is the subject of the first post in this series.

George Guest was born in Gloucestershire, England possibly on 31 March 1765. He was a labourer but his life changed dramatically when on the 24 October 1873, at the age of 18, he was arrested for stealing animals. At the Gloucestershire Lent Assizes on 24 March 1784 he was convicted for stealing, with force and arms, ten live pigs, goods and chattels of John Hathaway and a chestnut mare plus goods and chattels of Thomas Wills. Stealing livestock, particularly a horse, was considered a major crime resulting in the death sentence, however George received a reprieve with the sentence commuted to transportation to America. After the American War of Independence this was later changed to transportation to New South Wales. 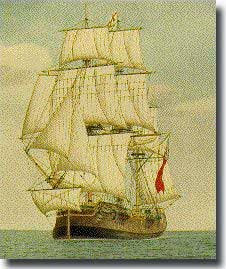 In February 1787 George was transferred to the Alexander in Portsmouth Harbour. The ship left Portsmouth on 17 May 1787 for the eight month journey to New South Wales. Two hundred and eight male convicts were aboard the ship when it left Portsmouth. Charles Bateson in his book, Convict Ships 1787 to 1868, describes the experiences of the convicts on this long trip.

More than four years after his arrest George arrived in New South Wales. It is difficult to imagine the shock that the convicts and soldiers must have felt arriving at what was to be their new home which had no settlement as they knew it but was just bush. The vegetation was very different from that in England with plants that they had never seen before. The Aboriginal people living near the harbour lived a very different lifestyle from Europeans. The animals and birds were strange and they had arrived in the middle of an Australian summer. Still the convicts would have had little time to think about their surroundings as shelters had to be erected and a source of fresh water located. Gradually the settlement evolved.

On 7 January 1790 George Guest travelled with a number of other convicts aboard the Supply to the new settlement at Norfolk Island. This first settlement, established in February 1788, on the island was an experiment to try and establish crops to supply the main colony at Port Jackson. Twenty-three people made up the original settlers including 15 convicts. They all had trades that may be useful in the new settlement. During the week the convicts worked for the government but on Saturdays they were allowed to clear land and plant their own vegetables. As well as planting crops  the men built huts for the new settlement. Fishing supplied a regular source of food. However there were problems including plagues of rats, ground worms and grubs as well as weevils in the wheat seed and parrots feasting on newly planted crops.

When George arrived on Norfolk Island the population had grown to 150. The ships, Sirius and Supply then brought another 200 convicts plus supplies. but unfortunately the Sirius hit a reef  and every effort was made to rescue as many of the supplies as possible. Martial law was declared and rations were halved. The colony was saved by the arrival of flocks of shearwaters that could be used as meat as well as provide eggs. With supplies of food scarce severe floggings were the punishment for anyone caught stealing food.Consequently when the Supply returned to the island on 7 August 1790 with plenty of provisions as well as another group of convicts it was a welcome sight. Mary Bateman was one of the convicts aboard the ship.

George Guest and Mary Bateman were soon living together. When the Rev Richard Johnson visited the island from Port Jackson in 1791 he performed a number of marriages and baptisms. On 9 November 1791 he married George and Mary. Between 1792 and 1804 George and Mary had five children - Sarah, George, John, Mary and William. (As not all records of births and deaths have survived there may have been other children.) We do know that Mary died on the island aged one year.

Until 1793 George was still a convict. He was reported to have been flogged on several occasions for telling a lie to Major Ross, for 'neglect of duty' and for employing convicts without permission. Despite these setbacks he started to build a life for his family on the island. After receiving his pardon he continued to receive rations until 1794. In 1796 he was granted 14 acres of land and was then able to supply the government with maize and pork. He gradually increased his acreage and purchased purchased sheep. He is reputed to have acquired 250 acres of land and built his flock to 600 ewes and 342 wethers by 1805. Life on Norfolk Island was not easy and the settlers faced many challenges. A number of books have been written about this period of history on Norfolk Island - Convicts and Commandants of Norfolk Island 1788-1855 by Margaret Hazzard being one of them. However George continued to acquire land and was considered by Major Foveaux to be a most industrious settler.

When the first Norfolk Island settlement was to be closed, George and his family were offered land in Van Diemen's Land as compensation for loss of property in the island. In September 1805 George and his family left Norfolk Island. George was now 40 and most of the rest of his life was spent arguing with authorities about his entitlement. Records show that he frequently sailed to Sydney from Hobart and back to put his case for what he considered he was owed. In January 1806 he was granted 24 acres at Macquarie Point but he considered he was entitled to a further 400 acres.

When Governor Bligh travelled to Hobart in July 1809 after being ousted from Sydney, George Guest was listed as one of the men in Hobart who provided fresh provisions for the Governor on board his ship on the Derwent. In Van Diemen's Land George once again acquired property though disputes about transactions continued. One of his properties was the Seven Star Inn in Campbell Street, Hobart which he owned until his death.

As the signature of George Guest shows, like many of the convicts, he could not write his name when he came to the colony. However lack of education did not stop him from becoming a successful, if disgruntled, land owner and businessman. One suspects that George may not have been an easy man to live with. Life was not necessarily easy in the new colonies and each of the locations that he moved to was newly established. When his family moved to Van Diemen's Land in 1805 the initial settlement at Hobart Town had only been established for a year. With each move the family would need to start over again and face the challenges of a new settlement. George Guest died in Hobart on 23 March 1841 aged 75. He was buried at St David's Cemetery.