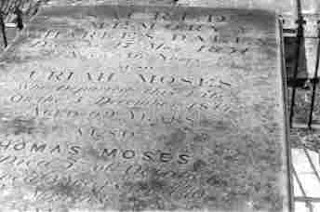 ﻿
Uriah Moses was born in 1780, possibly at Pontypool, Wales. Exeter is given as place of origin in some records. In 1798 he was accused of breaking into the shop of William Holmes - a linen draper and mercer in Whitechapel - (by cutting the glass possibly with a diamond) on 8 December 1797 and removing four or five cards of black lace, two pieces of silk handkerchiefs and two pieces of calimanco calculated as being worth a total of seven or eight pounds. The 18 year old Uriah was described in the records as being four foot eleven inches tall, dark complexion, brown hair and grey eyes. At the trial it was stated that Uriah had worked with Mr Jacobs in Petticoat Lane as a glasscutter for three years but had left three years ago.

Hannah Benjamin was accused of receiving the stolen goods. The theft took place at 6 o'clock in the evening. Uriah cut the back of his hand on the glass, resulting in a trip to Guy's Hospital. A card of lace was found in his hospital bed. The rest of the goods were then hidden in a room of one of Hannah Benjamin's lodgers.

Uriah Moses was sentenced to death, later commuted to transportation for life to New South Wales. Hannah Benjamin was sentenced to fourteen years transportation. he arrived in Sydney aboard the Royal Admiral in 1800. Uriah served his sentence in the Windsor district and received his ticket of leave in 1812. He was recommended for emancipation in 1821.

Once he had his ticket of leave Uriah worked as a baker and storekeeper in Windsor, first near Macquarie Street and later at 62-64 George Street.

Uriah was Jewish but is said to have converted to Christianity before his death. He died at Windsor on 5 December 1847.