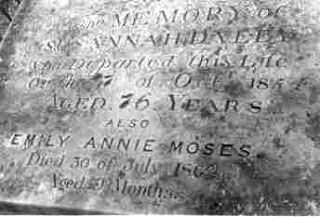 ﻿
CHARLES DALEY (also spelt Daly, Dayley or Daily) arrived in Sydney on the Boddingtons on the 7th August 1793. Charles was tried in Dublin in December 1791 for stealing saddles and was sentenced to seven years transportation. He was listed as being a landholder.

Charles Daley and Susannah Alderson were married on 27 May 1810 at St Matthews Church, Windsor.

SUSANNAH ALDERSON (in some records Hannah) was tried at York (East Riding) on the 7th April 1807 for perjury and received a sentence of seven years transportation. Susannah came to Sydney on the female transport Speke in 1808.

Susannah was born in Yorkshire - her place of origin was recorded as Gilmanby NR during the trial hearing - in 1778 and died in Windsor, New South Wales on 7 October 1854.

The children of Charles Daley and Susannah Alderson:
Susannah also had a son, William, born in England in 1806