H. Moses, the great Sydney left handed batsman, has recently arrived in England. According to the London Sportsman, he is in England on a pleasure visit, and will probably remain till October. He is greatly interested in fox terrior breeding, which is one of the chief reasons for his making the trip. He does not, we under stand, intend to play cricket — in fact, he would possibly find his leg again give way as soon as he attempted to do so. Possibly, however, his love for the game may, after all, prove too strong to resist.

The Kennel
(By " Sir Bedivere.")
The movements of Mr. Harry Moses in the old country have been followed by his brother fanciers here with the greatest interest for two reasons. First and foremost, as our most successful fox-terrier breeder, it was confidently expected that he would not leave England without securing one or more specimens of his favorite breed, and consequently his choice was eagerly looked for. Secondly, it is now pretty well known that he was empowered by the Kennel Club of N.S.W to accomplish, if possible, the affiliation of that body with its English prototype, and it is common property how well he has succeeded in that object. Referring to him the "Stock-keeper" of October 9 states : "He was seen at Brighton show watching Mr. Vicary judge the fox terriers, and no doubt filling himself with knowledge to be unbottled for the benefit of "the fancy" at the Antipodes. He has purchased from Mr. Vicary a brace of smooths of the pure Newton Abbot blood, Vainglorious, a bitch by Venio ex Varesco, and litter sister to one of the lights of the kennel-Visto-being one. She was served by Vivesco before she was shipped to Sydney on September 25. The other bitch is Vulesco, a young bitch which Mr. Vicary thinks is one of the best which has left Churchills. As an evidence of the kindly feeling which exists between the fanciers here and in the Antipodes, the price of this pair of terriers has been placad as reasonable as it is possible to make it."
Vainglorious arrived on Saturday last by the White Star liner Aberdeen. She is pronounced by the breeders who have seen her to be of a higher character than any previous importation, and she has fortunately proved to be in whelp. Mr. Vicary, her breeder, is amongst the oldest of English fox-terrior breeders, and it is the type which he has all along advocated and bred up to whioh is now most in favor in the old oountry. Now South Wales breeders have frequently shown their appreciation of the Newton Abbot kennels by puchasing from them. Vano, Eggesford Foiler, Validity, Vernet, Visiere, Napper, Very Uneasy, and Vilikins A.B. have all been imported from, or selected by Mr. Vicary. Vano was very highly thought of by many English fanciers, including Mr. Redmond, who next to Mr. Vicary is probably the most successful as well as the most popular fox-terrier breeder. Vano is, perhaps, the highest price fox-terrior ever brought to these shores, having cost Mr. Moses over £100 before he was safely lodged at the Glendon kennels. His progeny are very numerous and are noted prize winnors. Vernet, imported by Mr. T. F. Thompson, was one of the best, if not the best, fox-terriers ever imported into the colonies, and had received the highest honors before leaving England, He died from injuries received in a kennel melee before he had done much service at stud, and his progeny are consequently very few. Visiere, like Vernet and Vano, was descended from the celebrated champion Venio; she was imported by Mr. S. Neale, of Meadow Bank, but has now been dead several years. Not so Napper, Very Uneasy, and Vilikins A.B., imported by the same gentleman, which, though not remarkably successful as show dogs, are still doing good service at stud.
Australian Town and Country Journal Saturday 21 November 1896 page 44
The Kennel
(By " Sir Bedivere.")
Mr. Harry Moses, who has just returned from England, has been fortunate in obtaining a litter of puppies from his newly imported bitch Vainglorious, who had visited one of the cracks of Mr. Vicary's kennels before leaving England. The litter consists of three dog puppies, which will, of course, remain in quarantine until the period for their dam's incarceration has expired.
Australian Town and Country Journal Saturday 5 December 1896 page 44
[part of a report on the Annual Show of the Victorian Poultry and Kennel Club]
Among the judges was Mr. Harry Moses, the well-known Sydney cricketer, who adjudicated in
the section devoted to fox terriers.
Launceston Examiner Thursday 12 August 1897 page 6


THE KENNEL
Notes by "AGRIPPA'
Mr. Harry Moses, the well-known cricketer, on a recent visit to England, secured from Messrs. Vicary, a young bitch that should make a most decided improvement in the breed.
Launceston Examiner Saturday 2 October 1897 page 6


(NOTES BY "SIRIUS.")
A cricket match between the Kennel Club of New South Wales and the N SW. Poultry Club was played lately on the Sydney Ground and resulted in a win for the Kennel Club. The feathered gentlemen batted first and before the innings closed a total of 105 runs resulted; the doggy men replied with the good total of 214 for eight wickets. Of this number N. Ebsworth was responsible for 84. Harry Moses scored 48, and then retired. Greenwood 29, Williamson 14, and Dean 15 were the other principal scorers for the doggy men, whilst Crane 20, Parsons 13, F. Thompson 11, and H. Hamilton 14 played well for the "feathered" gentlemen.
I hear that the Poultry Club of N.S.W, want their revenge at cricket with their canine confreres in Sydney, and with that end in view intend challenging the Kennel Club men to play another friendly game; if so, with such men as Harry Moses and Ebsworth again playing, the doggy men should score another victory.
Western Mail (Perth) Friday 18 February 1898 page 38


[Part of a report of the Kalgoolie Dog and Poultry Society]
In fox terriers the best sires in Victoria and New South Wales are represented here by some promising dog and bitch puppies. Vivisco, Mr. HarryMoses' latest English importation, is responsible for a couple of good litters, the matrons of each litter, being direct descendants of that good old dog Vano,whose blood has been transplanted into some of the best terriers in Australia.
Kalgoolie Western Argus Thursday 26 April 1900 page 29 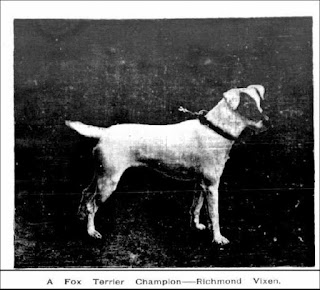 Richmond Vixen, like her shipmate, New Forest Danger (whose likeness appeared in our last issue), is a very fashionably bred terrier, and possesses qualities of such rare excellence that Mr. L. P. C. Astley, who is acknowledged to be one of the best judges of fox terriers, expressed the opinion, when writing to a friend here, that she was certainly the best bitch which ever left Britain for the Antipodes, and was very nearly the best bitch in Britain (the home of fox terriers). She was bred by-Mr. E. M. Southwell, Bridgenorth, and was whelped on March 14,1886. She was imported last year by Mr. E. P. Stephen, who sold her for a high figure to her present owner, Mr. Harry Moses, of Summer Hill. She was shown in England in the puppy, open, and champion classes, and her principal wins during twelve months, from November, 1886, to November, 1887, were: 1st novice class and special best in show ; 1st open class, Darlington ; 1st puppy class, Darlington, and special best in open class; 1st open class, Aquarium Show, also 1st puppy class, same show; 1st Olympia Show and cup best in open classes; 1st Dudley ; 1st Otley; 1st Thorne; 1st Aberavon ; 1st Ponte fract ; 1st Darlington ; 1st Saltaire ; 1st champion class, Hull, and special - best in show ; also 1st Leigh and special best in show. Her record is a highly creditable one, when we take into account the number of good show dogs she had to compete against, in the old country; and it stamps her as possessing in a marked manner that true terrier form and perfect symmetry which altogether accord with the most modern and advanced ideas of show-bench excellence, She was exhibited at the New South Wales Poultry, Pigeon, and Dog Show, held in the Exhibition Building, Sydney, last year, and took the 1st and special prizes for the best dog or slut in the show. She is entered for the Victorian Poultry and Dog Society's Show to be held in Melbourne next month, but can only be shown there in the champion class, having won not less than four first prizes in the open class in England. This, according to the society's kennel club rules, precludes her from competing in any other class. There is little doubt that she will give a good account of herself there, and we far ther incline to the opinion that it is improbable that she will meet a successful rival for some time to take from her that position which she un doubtedly at present holds, of being the best show fox terrier bitch in the colonies.


Some credit is due to Mr. E. Stephen for his importation not only of her, but of Cynisca and many other high-class terriers into the colony at a cost which would, no doubt, astonish many who were not acquainted with the high prices which have to be paid for, prize-winners in open and champion classes in England; and to him more than to all others is "the fancy" indebted for im proving that particular breed here.


As regards Vixen's good show points, we might to use "the fancy's" phraseology, describe her as being brimful of quality. She is the required size exactly; her weight being 16lb. She has a white body and tan markings on head. Her coat is dense and very good. She has good legs; and her body is properly set on them. Her body is very compact. In fact, her head, ears, neck, and body are but a remove from perfection. Viewed from either front, side, or behind, her outlines are very pleasing. Her fore feet might be a little more cat-like to suit the most modern taste; but, with that exception, she is the true type of the ideal terrier. She is so correct in pattern, and beautiful in form, that the only de fect which the critical eyes of the best British judges could discern in her was that she was a bit light in bone and jaw. Our portrait of Rich mond Vixen is from a photo, supplied by Creel man and Company Sydney-arcade, Sydney.
Australian Town and Country Journal Saturday 13 July 1889 page 30
Posted by Vicki's Blog at 18:12