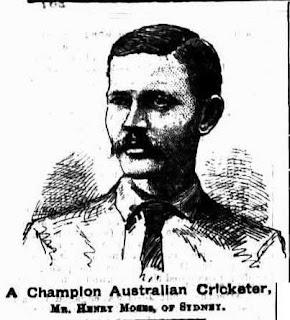 Although in times past he was overlooked by selection committees, Henry Moses, the hero of the big score of 207 runs not out in the late intercolonial match, has for some years shown such consistently good form as a batsman that no team of Australian cricketers would be considered complete without him. He has played in four inter-colonial matches, and three times against English elevens; and his performances this season have been of a very brilliant order. Two seasons ago his average was 88 runs per innings. Last season it went down to 20; but this season it has risen to 100.6-a grand average. Formerly Moses played for the Albert Cricket Club, but for two seasons he has played for the Belvidere Club. He is regarded as the best left-handed batsman in Australia, if not in the world and he can "bowl a bit" on a pinch. Besides, he is reliable in the field. Moses is about 29 years old, 5ft 8in in height, and weighs 10st 7lb.
Australian Town and Country Journal Saturday 4 February 1888 page 38

CRICKET
The New South Wales representatives have again shown their superiority to the Vic- torians, and have beaten them by an innings and 35 runs. The hero of the match was Harry Moses, who compiled 297 (not out). All attempts to dislodge, the Sydney man were futile, though nearly every man in the opposing team was tried with the ball. Though 24 runs less than Murdoch's great score of 321 in February, 1882, the innings of H. Moses may be regarded as a better performance, he having carrried out his bat whilst Murdoch was out.
Morning Bulletin (Rockhampton) Saturday 4 February 1888 page 5 (similar reports in other papers)


CRICKET
On Thursday the cricket match commenced on Saturday last between New South Wales and Victoria, at Sydney, ended in favour of the home team with four wickets to fall. This win has very much discounted the win of the Victorians a month since, as the New South Welshmen would undoubtedly have won by more wickets had not rain fallen during the progress of their second innings. Charley Turner was the most successful bowler for the victors, securing eleven wickets for 168 runs. Charlton secured four and Garrett three, Ferris not getting a single wicket. On the Victorian side McLeod obtained six wickets, and H. Tremble and Trott four each. Of the batsmen in the home team Sam Jones (100 and 24) exhibited something like his old form. Harry Moses, notwithstanding the bad wicket in the second innings, credited himself with 48 and 62 not out, a performance quite in keeping with his reputation. , Ire dale, Bannerman, and S. Gregory also shaped well. Deane, behind the wickets, showed good form, being responsible for slx catches. Among the Victorians no one showed better form than the veteran Blackham, Worrall, and Trott. Dryadale, Bruce, and McLeod also showed to advantage.
Morning Bulletin (Rockhampton) Saturday 1 February 1890 page 6

CRICKET
Playing for the Sydney Belvideres against Warwicks last Saturday, H. Moses and C. Richardson put on 241 runs before the latter was caught for a score of 112. Harry Moses was 125 (not out).

CRICKET.
THE match between Warwick and Carlton brought the season to a close so far as senior cricket is concerned, although the juniors will continue on until the end of this month. As was anticipated, Carlton gained a most pronounced victory over Warwick by an innings and nearly 200 runs. Gould was the only batsman who displayed anything like good cricket, and it must be admitted that on the bad wicket he played Callaway and Co. with skill. Most of the clubs have published their averages. Carlton shows out prominently with five men about 20. Donnan is top of the tree with 47.1 for three innings, once not out. It is a remarkable fact that his average is higher than his highest single innings, 39. This is accounted for by his being once not out. Alec. Bannerman, who is the winner of the badge, comes next with 37.6 for twelve innings, aggregating 376, his highest score being 138. Turner, who, had he remained in the colony, would have run Bannerman very close, comes third with 29.4 for ten innings. He is followed by the veteran Charlie Bannerman with 27 ; and Cowper is the fifth with 25. An average taken of the first eleven gives 22 runs per innings. In the bowling a great surprise is experienced in Callaway beating Turner by nearly a run. His figures are-1231 balls, 282 runs, 42 wickets, giving 6.30 runs per wicket, while the 'terror's' are-1232 balls, 348 runs, 46 wickets, or 7.26 runs per wicket. In Belvidere Iredale gained the excellent average of -56.3; for eleven innings, and was four times not out. Ferris, although only playing in six innings, comes next with 34.1. Harry Moses obtained 32.4 for seven innings, and although at times he batted well he cannot be said-to be near his form of three or four years ago. W. Richardson's average of 30.7 for eleven innings is a serviceable one, and was well earned. His brother Charley follows him with 25.4, the general aver- age being two runs above Carlton, viz., 24 per innings per man. Terris, who was decidedly off during the past season, just managed to get in front of Crane with 9.11 runs per inning, while the latter's figures are 9-12, Charlton's being 12-13. In the Alberts, Beatson from Wollongong holds the pride of place with 35.1 per innings. The evergreen Joe Davis obtained 26.6 for eight innings; while Rowley, who is a much underrated batsman, comes third 23.5. Julian secured best bowling average with 12.2.
Illustrated Sydney News Saturday 10 May 1890 page 2
Posted by Vicki's Blog at 18:12