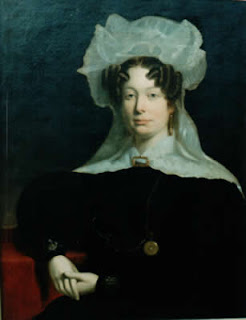 Janet Robertson was born 4 October 1780 at Aldergate, Middlesex in England. Her parents were William Robertson (1763-1788) and Jean Urquhart.(b. 1760). In his will, William describes his occupation as mate of the ship, Walpole, of the East India Company.

On 28 October1780  Janet (in some records Jennet) was baptised at St Botolph Without Aldersgate, London. 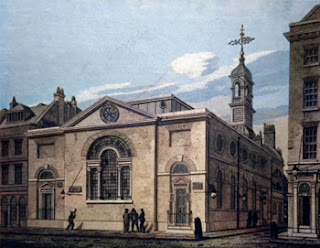 Janet's father died when she was eight years old.

Thomas and Janet lived in Penang from 1802-1808 where Thomas Hutton was employed by the local government as a Malay translator.  When Thomas' brother, William Charles Hutton, wrote his will he mentioned that his brother Thomas was living at Prince of Wales Island. At the time PWI was under the jurisdiction of the East India Company.

Thomas and Janet had ten children - some born in Penang or Calcutta while the others were born in England.

Thomas probably travelled back to Penang from time to time as in 1812 he is listed as being a Police Magistrate in Penang but the rest of the family probably remained in England for a number of years.

Then on 26 February 1815 Mrs Janet Hutton and Jane Hutton were listed as passengers on a ship to Bengal. One record shows that Thomas was in Penang at the time but was finalising his affairs on Prince of Wales Island to relocate to Calcutta. Looking at the birth records Janet probably remained in India until 9 November 1824 when Janet Hutton and Anna Robertson are reported to be returning to England from Calcutta.

It was quite usual for families working in India and parts of Asia to return to England taking the children born overseas to live with family in England and to be educated in England.

Once Janet and Thomas eventually retired to England they lived in Bath where Janet died in June 1862 aged 81. Thomas died in Bath in 1856 aged 84.

Janet was very interested in the plants that she found on her travels and spent time recording as much information as she could about each species and making illustrations of the botanical specimens as she found them.

Janet also collected illustrations of plants by Chinese artists. One of the paintings is included in the book, Raffles Art Redrawn: natural history drawings from the collection of Sir Thomas Stamford Raffles by Henry Noltie. The paintings is a picture of Ramatan painted by a Chinese artist for Janet Hutton in Penang in 1805. It has been suggested that Janet's collection may have encouraged Sir Thomas Raffles to start his collection of paintings. 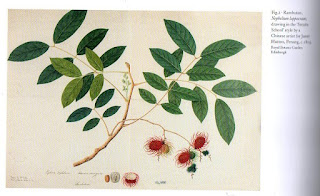 The Janet Hutton Collection is currently located in Edinburgh.

Note:Some years ago I found the following reference - 'The ship Janet Hutton was wrecked in 1825, on the edge of the sands, on the western side of the channel (India Directory)' - so maybe there was a ship named after Janet? Obviously more research is required.

Janet Robertson and Thomas Hutton are my 3 x great grandparents.