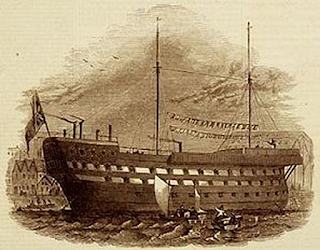 Transportation to America ended with the American War of Independence. This resulted in additional overcrowding of English prisons so a new solution needed to be put in place. In 1776 the Criminal Law Act (the Hulk Act) was passed allowing for prisoners to be housed in old ships, initially on the Thames at Woolwich. The convicts would be put to work to work on projects for the benefit of the navigation of the Thames.

Duncan Campbell was given permission to initially use two of his ships, the Justitia and the Censor to house the first prisoners. The Justitia, former convict ship, was the first ship used and when it was full the Censor also became a prison hulk. George Guest was transferred from Gloucester Gaol to the Censor to await transportation to Australia.

Initially there was little government supervision of the hulks.Campbell employed deputies and overseers to patrol the decks of the hulks and guard the prisoners. Food was scarce and of poor quality. This was a deliberate ploy as it was considered inappropriate that the prisoners appeared to be better treated than free people living in poverty. Conditions on the hulks were crowded and dirty. There was poor sanitation and diseases such as cholera, dysentery and typhus spread quickly. There was a high death rate on the hulks. 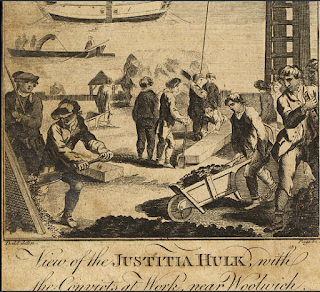 The convicts on the hulks at Woolwich worked in chain gangs on projects relating to the Thames either in the dock yards or on the river banks. One of the tasks was to remove gravel and excess soil from the banks of the river.

The number of hulks increased and eventually were located at Deptford, Chatham, Gosport, Plymouth, Portsmouth, Sheerness and Cork as well as Woolwich. Duncan Campbell's contract to maintain his hulks was not renewed in 1802, but the hulk system continued until 1857.

Fortunately George Guest remained on the hulk, Censor, only until February 1787 when he was transferred to the convict ship, Alexander, part of the First Fleet that arrived in New South Wales in January 1788.