Edgar the Peaceful - King of All England

Queen's Birthday weekend recently so decided to write a post about a royal ancestor from Saxon times. On Monday (3 June) the episode of the End of Empire: the Rise and Fall of Dynasties on the History Channel was about the Saxon king, Edgar, who is credited with being the first King of All England. 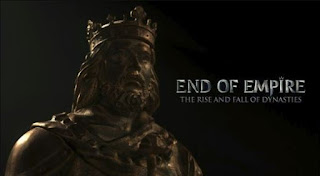 Edgar was born in Wessex in 943, the son of Edmund I (921-946) and AElgifu of Shaftsbury. Edgar was a great grandson of Alfred the Great (849-899). Like many other members of his family, Edgar was reputedly not a tall man, possibly less than five feet tall. Edgar had been educated by the Abbott of Abingdon who was a friend of Dunstan, an influential member of the Benedictine order. Edgar was 16 when he became King in 959, after the death of his brother.

For many years England had been divided into seven main kingdoms each with their own king - East Anglia, Mercia, Northumbria, Wessex, Essex, Kent and Sussex however the number of kingdoms and sub-kingdoms varied with battles for supremacy among the rulers. By the time of Alfred the Great, Wessex was the only kingdom not under the rule of the Danes who had settled in parts of England with the Viking invasions. Attempts were made by the Danes to invade Wessex but Alfred and his army resisted the attacks, made peace with the Danes and Wessex remained under Saxon control.

For sixty years after the death of King Alfred there had been many battles between the Danes and Saxons in different parts of England for control of land.

Edgar's uncle, Athelstan (894-939) became king in 927. When his father, Edward, died in 924 Athelstan inherited the kingdoms of Mercia and Northumbria and after the death of his brother, AElfweard, he also inherited the powerful kingdom of Wessex. In 927 Athelstan gained control of York, a stronghold of the Danes, and consequently ruled most of England. At the Battle of Brunanburh in 937 Athelstan consolidated his control in England by defeating troops of Scottish and Danish armies. He had also made peace with other leaders of land controlled by the Danes including Eric Bloodaxe who was in control of Northumbria.

Edgar became King after the death of his brother, Eadwig, and he is best known for attempting to solidify Saxon control over England by working with the Danish communities that existed along with Anglo Saxon regions throughout the country.

In 957 Edgar invited Dunstan, who had been exiled by Edgar's brother two years earlier, back to England and made him Bishop of Worcester and later Bishop of London. Dunstan eventually became Archbishop of Canterbury after Edgar became King of All England in October 959 . Once he was king, Edgar, with Dunstan's assistance, worked to restore monasteries damaged or destroyed during Viking raids as well as building new ones. This often resulted in the need to acquire additional land for the religious communities from members of the nobility making him unpopular with some of the nobles.However Edgar developed powerful alliances through strengthening the church. A Monastic Agreement was established and ratified by a document, Regularia Concordia, to protect monks and nuns in England signed by the King and also his Queen.
In 973, a second coronation service was held for King Edgar, at his request, at Bath Abbey. Dunstan, Archbishop of Canterbury, prepared the coronation service which formed the basis of future coronations of kings and queens. A special feature of this service was that Edgar's wife, Aelfthryth was also crowned as queen. An aim of this ceremony was to demonstrate Edgar's dominance over England.

After the service Edgar travelled to Chester where six (or maybe eight depending on differing records) sub-kings from regions of England plus leaders from Scotland and Wales, formally pledged allegiance to Edgar as King of all England at St John the Baptist Church. It is reported that these sub-kings rowed Edgar along the River Dee to the service.

In 961 Edgar had married Ethelflaed, the daughter of an ealdorman named Ordmer. They had a son, Edward, born in 962. This was possibly a political marriage to help strengthen Edgar's standing in Mercia. Little is known of this marriage or what happened to Ethelflaed - she may have died or there may have been a divorce.

What we do know is that Edgar formed a new partnership with Wulfthryth who lived at Wilton Abbey and was possibly training to be a nun. In 962 a daughter, Edith (962-986), was born so the relationship appears to have occurred when Edgar was married to Ethelflaed. Soon after the birth of her daughter, Wulfthryth returned to Wilton Abbey where she became Abbess.

Edgar's third relationship was with Aelfthryth (Elfrida) (940-1000) who was later made queen at Edgar's second coronation.

The history of events that occurred during this period of British history is a challenge to unravel as much of the information no longer exists, stories that have become legends occur and much of the information available is contradictory and written long after the events. The early relationship between Edgar and Aelfthryth is one example.

What is known that this was a lasting marriage with Aelfthryth being interested and involved in the political and religious reforms being undertaken at the time. Edgar and Aelfthryth had two sons, Edmund (965-970) and Ethelred (968-1016).

As well as being known for achieving and maintaining relative peace between the Saxons and the Danes in England - including his neighbours in Wales and Scotland - earning him the name of Edgar the Peaceful, Edgar was responsible for strengthening the power of the church and thereby forming a strong alliance with the church during his reign.

Alfred the Great had created a strong navy to protect the coast from the Vikings. Naval power was strengthened during Edgar's reign building a navy of 3,600 ships. However Edgar was also known for reordering English currency so the same coins were used and were readily available throughout the country.

Edgar died unexpectedly on 8 July 975. He was not yet 32 and was buried at Glastonbury Abbey in Somerset.

Aelfthryth was determined that Ethelred would be the next king  instead of Edgar's eldest son, Edward, and became involved in the factional fighting that occurred when Edgar died. The apparent peace that had existed for a short time unfortunately disappeared.

[Edgar was my 32nd great grandfather].