On Wednesday the 18th instant, an inquest was held at Parramatta, before James Wright Esq. J. P. in the absence of the Coroner, on the body of Charles Daly, late of Windsor, who was accidentally killed on the previous evening, on the road near Parramatta, by the wheel of a cart, laden with maize, passing over his body. The jury returned a verdict accordingly.

Sydney Gazette and NSW Advertiser 26 May 1831

The brief report of an inquest reported the death of my great x3 grandfather, Charles Daley. 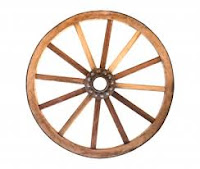 Barbara Hall in her book, Of Infamous Character: the convicts of the Boddingtons, Ireland to Botany Bay, 1793, provides some additional information: 'Charles Daley died when his cart ran over him, whilst he was returning from the Sydney market. His son-in-law John Wood found the body'.

Three mentions of the death of Charles Daley each providing a clue or clues to his sad demise.
The John Wood mentioned by Barbara Hall was the son of two convicts and was born in Sydney in 1798. In 1829 he married Mary Ann Daley (1811-1894), the second daughter of convicts Charles Daley and Susannah Alderson. John Wood's detailed obituary published in the Hawkesbury Chronicle and Farmers Advocate provides information about John's life including his occupation as 'principal carrier in Windsor'. The paper described what his job involved:


The storekeepers and farmers of the district trusted him implicitly with the conveyance of their goods to and from Sydney, and many were the important commissions he executed on behalf of his patrons. It was a serious matter in those days carrying on the Windsor and Parramatta Road. Over dreadfully bad roads in danger of bushrangers and marauders, it was at least a two days journey each way.

In 1831 the journey from Windsor to Sydney was a long one taking at least two days. Originally the favoured route from Sydney to Windsor was by water, particularly when transporting goods of any kind. A narrow track between the two locations was constructed in 1794 and it was gradually widened to allow carts to travel via this route (Old Windsor Road). When Governor Macquarie arrived he made the improvement of the road a priority (Windsor Road). Toll gates were introduced to pay for the construction and upkeep of the road. However, as suggested in the newspaper article, the condition of the road was not good.

We know from the 1822 muster that Charles owned land at Windsor, including 14 acres of wheat, 6 acres of maize and 6 acres of barley. He also had 70 hogs. The inquest states that Chales' cart was carrying a load of maize so he was probably taking the produce to (not from) the market in Sydney and decided to travel with John on one of his trips there.

We know that the accident occurred on the Windsor Road near Winston Hills, not far from Parramatta. The road would have been narrow and not in good repair. There was probably bush on each side of the road. It would also seem that Charles and John were travelling separately for a time. The width of the road would probably have prevented them travelling two abreast. Perhaps John lost sight of Charles' cart when they went around a bend.

We can only surmise how the accident may have occurred. Maybe the cart wheel become stuck in a rut or went off the the side of road and Charles was run over when trying to rectify the situation. Maybe the horse was startled by an animal and the accident occurred when Charles tried to calm him. Whatever happened it must have been a shock for John to discover his father-in-law dead on the road.

We also do not know if Charles had made this journey to Sydney before. If the farmers in the Windsor area were all planting similar crops it would probably be easier to sell the maize in a larger centre such as Sydney. The market in Sydney was origially located near the wharf as much of the early produce was brought to Sydney by boat. The market then moved into Market Square in George Street.

There are obviously questions arising from Charles' death which will never be answered however it is possible, from the information discovered so far, to try and understand how this accident may have occurred.
Barbara Hall,  Of Infamous Character: the convicts of the Boddingtons, Ireland to Botany Bay, 1793, (2004).