Anyone investigating this Family Connections blog will notice, in the Labels column, a special section for Sport. Sport is definitely a theme in my family history. I have always been aware of sport, probably because my father was a sports journalist and sporting events were therefore definitely part of my life. Family history research, however, has also revealed many sporting connections in the family story.

Since the first horse race meeting in Sydney in 1810 there has been family involvement with horse racing including the trainer of Archer, the first Melbourne Cup winner, and owners of Poitrel, winner of the 1920 Melbourne Cup. Family members for generations have played, and continue to play, cricket including Harry Moses who played cricket for Australia in 1887. And then there is golf, another sport that family members have played. 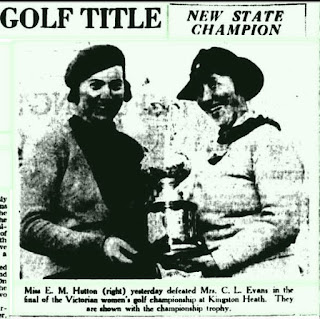 Eleanora Mary Hutton (daughter of my great x2 uncle) for many years was a well known female golfer in Victoria. Nell, as she was known, was born in 1908 and, following articles in Trove, was playing competitive golf from the early 1930s into the 1950s.

An article in the Sydney Sun (23 August 1936) reported that 'Miss Nell Hutton, only in the early

twenties, has held the Eastern Club (Victoria) Club championship for the last four years'. Another article in the same paper (2 September 1936) reported that Nell would be a future champion:

If one combed Australia for future champions, one could not do better than pin faith to the prospects of the Victorian, Miss Nell Hutton. Although she went down to Miss Oliver Kay yesterday, Miss Hutton has been quite the most outstanding of all the Australians who took part in the open championship tournament in Adelaide. Ever since she hit off on Monday in the interstate match her game has demanded attention, for she has a command of every club. She is inclined to a 'starter's' complex and rarely warms up right from the start, but her future is quite assured. She plays golf with a smile, spreads encouragement to others less fortunate and her attitude of thorough sportsmanship makes Australia proud of her.

Nell's name frequently appears in the newspaper reports of golfing events throughout Australia during the 1930s. In 1936 she was a member of the successful Australian team which retained the Tasman Cup that year while in 1937 Nell was the winner of the Victorian Women's Amateur Golf Championship.

In 1938 Nell and fellow golfer, Bertha Cheney, left for a golfing holiday in England which included playing in the British Championships.
Another article on their proposed adventure appeared in the Herald 26 March 1938:

Two clever young golfers, Miss Nell Hutton and Miss Bertha Cheney, both members of Eastern Golf Club Associates, are off in the Orcades on Tuesday for a holiday abroad. They are taking their golf clubs with them, but their holiday is not to be primarily a golfing one, Miss Hutton tells me. "We shall play In the British championships," she said, "and then we shall forget serious golf and go sightseeing." They will get a car and motor through England, Scotland, and Wales, and are planning, too, a trip to Norway. All the golf they will have will be an odd game or two when they reach a town with a course which attracts them, and they happen to feel like playing.

The following year Nell married William Hamilton Smithett, a tennis coach and golfer. Their son, Bill, was born in 1941. From 1946 Nell's name starts appearing again in the sports reports. Meanwhile another member of the family was also learning golf.
In 1948 Nell was runner-up in the Victorian Amateur Golf Championship but she was announced  the top Victorian female golfer for the season winning the Victorian Women’s Champion of Champions.

For a number of years the winner of the Victorian Women's Stroke Play received the Nell Smithett Trophy. Currently the Horsham Golf Club awards the Nell Smithett Memorial Trophy for a ladies team event. Nell had moved to Horsham and was ladies' champion 1964-1967 and Wimmera Champion in 1965. Nell died at Horsham in November 1969.