The State Library of Victoria has a number of books on the early settlement of Tasmania so I ordered some of them to try and discover where George Guest had his 300 acres of land at Risdon Cove.

I knew that the land was close to the original settlement so I started by looking at a work by Angela McGowan describing an archaeological dig of the area in 1978-1980.  From the excavation of several sites in the area McGowan describes a number of the structures from the original settlement. However it was on page 14 that I had my 'Eureka' moment when I found a sketch by Woodward of some of the landholdings in the area. To the right of the Risdon Brook was a rectangle identified as G Guest 300 acres.
On the other side of the brook the land was identified as belonging to W J Anson 300 acres. (William L'Anson was a surgeon who sold the land to Thomas Birch). In 1812 this block was sold to Andrew Geils, the person who tried to annex George Guest's land in 1813. Andrew Geils left Van Diemen's Land in 1814 but arranged for a series of agents to look after his interests.

Unfortunately I have found no further description of Guest's property. Phillip Tardif, however, provides a description of some of the buildings on Geil's property. "A two-storey brick house arose near what had been Moore's original garden, and a stone wharf at Bowen's original landing place. Geil's pride and joy were his 'Beautiful Gardens' he planted - with apple and peach trees, grapevines and oaks". Tardif then adds - "Stockyards, stock-keepers' huts and poultry houses were built also, but by costly error (for Geils) on the adjoining 300 acres owned by George Guest." (Tardif p192)

The Tasmanian Archive and Heritage Office (TAHO) has a series of county maps on the LINC website. The maps are series AF396 County Maps created by the Lands and Surveys Department. Risdon Cove was in the Parish of Forbes located in Monmouth, one of the twenty early land districts in Tasmania. AF396-1-256 is another map of the area around Risdon Cove. This map was surveyed by a surveyor named Seymour and also shows Guest's land. 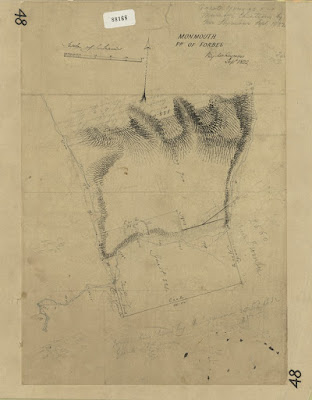 A copy of the original map surveyed by Woodward is also available on this site as AF396-1-216.

There is still much to learn about this 300 acres of land and how it was farmed plus when it was actually sold. However an article in The Sydney Gazette and New South Wales Advertiser 21 January 1810 p2 provides an account by George Guest of the extent of farming near Hobart Town a year or two after he acquired his 300 acres at Risdon Cove.


From a Mr George Guest, a few days since arrived from the Derwent, we learn the following particulars relative to that Settlement, which may appear interesting. The ground under cultivation Mr. Guest considers to be about 1500 acres. The crop of wheat of the present year's growth he considers will scarcely average eight bushels to the acre, owing to the seed, which was mostly sent from hence, having been of a very indifferent quality. Sixteen acres of Mr. Guest's own growth, he scarcely imagines will produce three bushels to the acre. The flock of horned cattle is in very good condition, and the prices of articles are much similar to those with us; fresh beef, mutton and pork being 1s. 6d. per lb.; potatoes 2d. per do; fowls dear, being from 5 to 6s. each; tea 8 to 12s. per lb.; sugar 10d. per do; spirits 15 to 16s. per bottle; and the store price of wheat 21s. per bushel before the Union arrived. The different settlements of agriculture are New Norfolk, 25 miles from Hobart Town, on the banks of a fine fresh water river, navigable at high water to a vessel of the Lady Nelson's burthen; the next we notice will be Herdsman's Cove, about mid-way between Hobart and the above; — This has only been settled a few months since by settlers from Norfolk Island, who have not yet been able to plant any thing but potatoes; — the river gets brackish at high water. The next is Kangaroo Point about two miles from the town but on the opposite side the river, well watered by a very fine run; and about a mile more distant from Hobart is New Town, which was the first settlement made. Ralph's Bay is about eight miles from Hobart, and also on the opposite shore of the river. Here from 130 to 200 acres are in cultivation by the Norfolk settlers; about 200 of whom have at different times been removed thither with their families, amounting to 1100 persons more or less. The land near the town is considered some of the best yet cultivated, and is mostly laid out in gardens, which produce vegetables in tolerable abundance.