The website of the State Library of New South Wales includes an archived online exhibition - Day at the races: the horse in Australia. In January 1788 five horses arrived in Australia with the First Fleet and by 1810 it was recorded that there were 203 horses in New South Wales. In the early days of the colony horses were rare and expensive and usually only owned by military officers or by free landholders. In October 1810, shortly after Govenor Macquarie arrived in New South Wales, the first official racing carnival was held at the Sydney racecourse, part of the newly created Hyde Park. 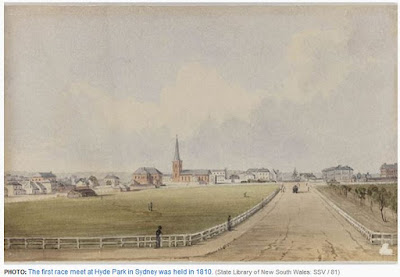 One section of the online exhibition states that 'Governor Macquarie inaugurated the first official race meeting at the new Sydney Racecourse. Macquarie saw the racecourse as a perfect neutral meeting place for colonists of all classes: military, convict, emancipist and immigrant.' The racecourse was constructed in August 1810 by members of the 73rd Regiment who came to New South Wales with Macquarie. They 'levelled ground on the eastern edge of the town and marked out the course. The straight commenced at the turn from Park Street into Elizabeth Street, with the grandstand (erected in 1813) and the winning post at the junction of Market and Elizabeth Street, on the present day site of St James Railway Station.' Funding for the project was provided by subscribers.

Searching newpapers in Trove provides details leading up to the first race meeting in Sydney. There is also information about a range of social activities associated with the race meeting.

The Sydney Gazette and New South Wales Advertiser 21 July 1810 page 1 has a notice about a meeting of the Subscribers to the Sydney Race Course to meet in the Mess Room of the Officers of the 73rd Regiment on Monday at 10 o'clock.

The Sydney Gazette and New South Wales Advertiser 18 August 1810 page 1 contains a report of a dinner attended by the Subscribers to the Sydney Racecourcse to celebrate the birthday of the Prince of Wales. A number of Toasts were drunk during the evening including to the King, the Queen, the Prince of Wales, the Duke of York and the rest of the Royal Family, Lord Mulgrave and the Navy, Sir David Dundass and the Army, His Excellency Governor Macquarie and the Colony, Mrs Macquarie the Patroness of the Races and the Ladies of the Colony, The Turf etc. The comment was made that 'the evening passed with the utmost convivitality and harmony'.
The report continued:


The RACES are fixed for Monday the 15th of October; and three plates of 50 guineas each will be run for during the week; exclusive of several bye-matches, subscriptions, &c.
This Establishment, altogether novel in this Country, bids fair to acquire celebrity and success from the judicious arrangements under which it has been projected, and the distinguished Auspices under which it has been brought forward, besides the advantages which the Country at large is likely to derive from the improvement of the breed of horses, an object, that in a rising Colony may be calculated upon as conducive to its internal interests and prosperity.
Lieutenant Governor O'CONNELL, Lieutenant Wright, and Mr. Williams are the Stewards elect for the present year.

The following week John Reddington, the Clerk of the Course, issued a warning in The Sydney Gazette and New South Wales Advertiser 25 August 1810 page 1:


The Subscribers to the Race Course are requested not to ride the horses over it that they intend to enter for plates or subscriptions at the ensuing races,nor to suffer their servants to train them over it: Any horse that may be seen in training on the Course will not be allowed to start.--By order of the Stewards.

On 19 September a Bachelor's Ball was held by the Subscribers to the Sydney Race Course and was reported to have been a great success. The Sydney Gazette and New South Wales Advertiser 22 September 1810 page 2.

The Subscribers to the Sydney Race Course held another meeting in the Mess Room of the Officers of the 73rd Regiment on Monday 1 October. The Sydney Gazette and New South Wales Advertiser 29 September 1810 page 1.

Under the heading, A Card, the following notice appeared in The Sydney Gazette and New South Wales Advertiser 6 October 1810 page 3 - 'The Subscribers to the Sydney Race Course are informed, that the Stewards have made Arrangements for two Balls during the Race Week, Tuesday and Friday.--Tickets at 7s. 6d. each to be had at Mr. E. Wills's, George Street.'
On page 4 of the same paper - 'The Public are requested not to bring Dogs on the Sydney Race Course; any found thereon after this Notice will be Shot.'

A week before the racing carnival, The Sydney Gazette and New South Wales Advertiser 13 October 1810 page 2 reminded Subscribers about the two balls then added -


An ORDINARY for the Subscribers and their Friends each Day of the Races at Mr. Wills's.- Dinner on Table at Five o'Clock.
On Monday the Races commence, and continue Wednesday and Friday. Horses to start each day at one. For general information on the subject of these elegant sports, a Racing Kalendar will be in readiness at nine on Monday morning.-Price 6d.

The Sydney Gazette and New South Wales Advertiser 20 October 1810 page 2 has a detailed  report of the three day carnival held at Sydney racecourse (Hyde Park) on Monday 15, Wednesday 17 and Friday 19 October. The report for the second day of the race meeting read:

Additional information about the Ladies' Cup was provided:
The Ladies' Cup, which was of very superior workmanship, won by Chance, (Chase) was presented to Captain Ritchie by Mrs Macquarie; who accompanied by His Excellency, honoured each day's Races with her presence, and who, with her usual affability, was pleased to preface the donation with the following short address:
"In the name of the Ladies of New South Wales, I have the pleasure to present you with this Cup. Give me leave to congratulate you on being the successful Candidate for it; and to hope that it is a prelude to future success, and lasting prosperity"

Races at the racecourse at Hyde park continued until the early 1820s. However there were problems in maintaining the surface of the racecourse as shown in Sydney Gazette and New South Wales Advertiser 2 February 1811 page 2.


The Non-Subscribers to the Sydney races are hereby strictly forbid driving or riding Horses on the Course, without Permission of the Stewards. It is hoped the Subscribers will see the necessity of keeping on the outer Edge, when they drive or ride round the Course, as the Damage already done to it by Carriages driving near the Posts must be obvious to every person. ( By Order of the Stewards),

The original number of Subscribers was limited to 50 however in 1813 the suggestion was made to hold a ballot allowing gentlemen who were newcomers to the Colony the opportunity to also become Subscribers. Sydney Gazette and New South Wales Advertiser 17 July 1813 page 2. Another announcement in this issue of the newspaper stated:


None but Subscribers, or their authorised Servants, being entitled to ride on the Race Course, it is hoped that all other Persons will see the Propriety of avoiding the Course, during the Exercising Season, and thereby do away the Necessity for resorting to other Measures for the preserving the Course to its proper Object.
Gentlemen are requested to instruct their Servants not to ride on the Race Course unless for the Purpose of training, until after the Races, as those who are not in training interrupt the regular Exercise of the Horses destined for the public Amusement of the Race Week.

The following year when the races were held from 17 August to 21 August, Tipsey (now 5 years) was again entered in the Subscription Plate but, along with a number of other horses, was disqualified. The report added that dispite the heavy rains experienced from the Monday to the Thursday, "the Course was much crowded".
Sydney Gazette and New South Wales Advertiser 22 August 1812 page 2.


Strayed from Burn's Farm at Botany Bay, about ten days since, a Bay Gelding, black legs, mane and tail, known by the name of Typsey, late the property of Mr. Lord, but now belonging to Major Geils. Any person finding the same and bringing him to Major Geils, will be handsomely rewarded.

As Tipsey was being raced again by Mr Lord later in the year it would appear that Simeon repurchased the horse.

The Dictionary of Sydney has a short article on the Hyde Park racecourse.

The Australian Racing Report also includes an artile on early days of racing in Sydney.

Note. At the end of the report (in The Sydney Gazette and New South Wales Advertiser 20 October 1810 page 2) about the three days of racing at the Sydney Racecourse in October 1810, the following information was also provided:

Reports in the Sydney Gazettee and New South Wales Advertiser show that George Guest was in Sydney for at least parts of 1810. It is therefore probable that he was the G. Guest whose horse raced Boshy's horse.
Posted by Vicki's Blog at 21:28