Mary Bateman is recorded as spending her final years in lunatic asylums at Parramatta and Liverpool in New South Wales. Mary died at the asylum in Liverpool in 1829 and unfortunately there are no records about patients in asylums at this time. However there is some information about the establishment of asylums in the colony.

On 29 May 1811 Governor Macquarie visited Parramatta and visited the new asylum at Castle Hill. A report in the Sydney Gazette 1 June 1811 described the establishment of the asylum.(1) 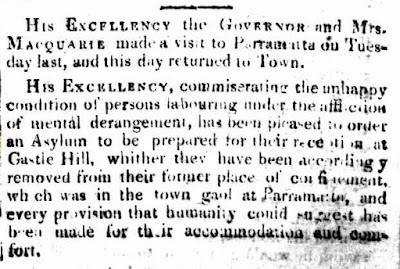 Previously a number of people with mental illness were housed in the town gaol.

The two storey former granary on the Castle Hill Agricultural Settlement was used as the main asylum building. Before its time as a granary it had been used as convict barracks. The building was made of sandstone, had a shingle roof and measured approximately 100 feet by 24 feet. It was probably first used as an asylum in May 1811. Six inmates were initially transferred from the gaol to the asylum where they were looked after by a man named Cullen and a woman who was the cook. (2)

A short article in the Dictionary of Sydney about the Castle Hill asylum describes it as being 'overcrowded and squalid' and plans were made for the establishment of a larger asylum at Liverpool. (4)

The Colonial Secretary Index 1778-1825 contains a list of topics relating to correspondence concerning the running of the Castle Hill Asylum.

An article about the Liverpool Asylum on the New South Wales State Records' website provides the following information:

On 28 September 1825 the Grand Jurors had reported to the Court of Quarter Sessions, Parramatta, that the Lunatic Asylum at Castle Hill was "altogether unfit" due to its lack of a reliable water supply and distance from medical attention. The asylum contained 27 male and 8 female patients, under the care of one keeper. The report recommended that these "afflicted and unfortunate persons should be secured in a proper Hospital more directly situated in the vicinity of the Town", with a building constructed for the purpose. (6)

Mary would have been one of the female patients.

The article also includes the information that patients were committed to the asylum by order of a magistrate.

Patients from Castle Hill Asylum were moved to accommodation at the Liverpool Court House in 1825. It is debateable that this new accommodation was much of an improvement. It was here that Mary died in 1829.

Patients remained in this building until the new Tarban Creek Asylum was built and opened in 1838.

References and credits
Posted by Vicki's Blog at 14:24