Sarah Holland was born in Windsor on 2 January 1820. Her parents were Richard Holland (1783-1867) who came to New South Wales as a convict and Mary Ann Roberts (1793-1863), daughter of convicts William Roberts (1756-1820) and Kezia Brown (1771-1854). Various members of her family were among the pioneer European settlers in the Windsor area. Most had land-holdings that they farmed and Sarah's father also had a shop in Windsor. 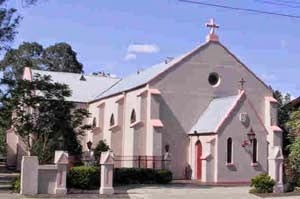 William Pendergast was a farmer and initially he and Sarah lived at Cornwallis, near Windsor, before moving to William's property, Campberfield, near Campbelltown. William was only 42 when he died on 6 October 1850. Sarah was 30 when she became a widow with five children to look after. William left a complicated will with packages of land to be inherited by his children (later Jane's name was removed) when they turned 21. In the meantime rent form the land was to be used for their education and maintenance for his wife. Sarah was provided with an additional sum of £15 per annum provided that she did not remarry. A codicil to the will allowed Sarah to live on one of the properties, Whyte's Farm, until their youngest son reached his majority. Five male relatives oversaw the conditions of the will and probate was granted on 8 April 1851.

Sarah purchased a parcel of land in Cox Street, Windsor on 26 July 1858. She added to this property when she purchased adjoining land in The Terrace, Windsor. Sarah had been offered the opportunity to purchase the property when Henry Forrester, the husband of her aunt, died. However she elected to purchase the land at public auction on 19 July 1873. Unfortunately this decision cost her an additional £22.
On 8 September 1857 Jane Pendergast married John Tebbutt and they had six daughters and one son. John Tebbutt (1834-1916) was an astronomer and became famous for his observations of comets.

John Pendergast married Rachel Emmerton (1846-1933) on 19 March 1863 and they had sixteen children. John was a veterinary surgeon, farmer and corn buyer. On 23 December 1874 a fire swept through part of Windsor destroying many properties, including John's property. He tried to obtain a loan from the bank and in the end surrendered the life interest in the properties inherited from his father to the bank in order that his debts could be paid. He continued to work as a veterinary surgeon and his wife and daughters did dressmaking to help support the family but they continued to struggle and John was declared insolvent in 1891. The family later moved to Glebe in Sydney.

Mary Pendergast was only two months old when she died in February 1845.

Elizabeth Penelope Pendergast married George Moses (1838-1908) on 8 June 1865. They had six children. George was a clerk in the New South Wales Civil Service. Initially they lived in Armidale but later in Bathurst where George worked in the Parcels' Office at the railway station. After Elizabeth inherited money from her father's will the family moved to Sydney.

On 30 January 1877 William Pendergast married Mary Jane Dunstan (1855-1935). William and Jane had six children. As well as owning and renting family properties, William, like his brother, John, was a veterinary surgeon.

Sarah died on 16 October 1891 at the home of her son, William, at Pitt Town. She was 71 years old. Sarah had recently returned from South Australia where her daughter, Margaret had died seven weeks earlier.  Two of her grandchildren had also died in May and her son, John was declared bankrupt. The months before Sarah's death had therefore not been particularly happy ones.

When Sarah married William she did not change her religion though the children were baptised in the Catholic church. Sarah was buried at St Matthew's Church of England, Windsor on 17 October 1891.

For further information about Sarah Holland and her family see the book, A Rich Inheritance, volume 1, pages 41-47
Posted by Vicki's Blog at 20:44