Anne (or Annie) Smith was born in Singleton, New South Wales on 10 April 1864. Her father was Charles Septimus Smith from London and Sarah McCallum from Glasgow. Her parents were married on 22 June 1859 at Drayton in the Darling Downs in southern Queensland.

Annie was born after her parents had moved to Singleton after living in Maitland for several years. According to Annie's certificate her father was working as a warehouseman at the time. Annie was the fourth child of the fourteen children born to her parents. At the time of her birth she had one older sister, Ellen, and two brothers, John (Jack) and Ronald. From the birth places of the children, the family appear to have lived in Singleton for approximately five years before returning to Maitland and then moving to Wollongong. Five children were born in Wollongong between 1868 and 1874. The family then briefly moved back to Singleton before settling in Newtown, a suburb of Sydney before returning to the neighbouring suburb of Marrickville.

On 2 November 1887 Annie married a solicitor, James Campbell Thom. The notice in the Sydney Morning Herald for 1 December 1887 read:


THOM—SMITH.—November 2, at the residence of the bride's  parents, Addison-road, Marrickville, by the Rev. Alexander Osborne, M.A. assisted by the Rev. Robert Collie, F.L.S., James Campbell, sixth, son of the late William Thom, of Glasgow, Scotland, to Annie, second daughter of Charles Septimus Smith, of Brixton, England.

Alec Thom was a first year student at Sydney University in 1906. He became a school teacher and taught in schools in Queensland. Alec married Netta Holyroyd Armstrong in 1914 and they had two children, Campbell and Shirley. After 1937 the electoral rolls provide separate addresses for Alec and Netta. The World War II Nominal Roll shows that Alec enlisted in the RAAF in December 1941, at the age of 51, and was stationed at the 2 ANS (Air Navigation School) at Nhill (Victoria) until 1 June 1944 when he was discharged. Alec died in Queensland in 1970, aged 82.

Agnes Campbell Thom was born at Burwood. In 1914 she married Sydney journalist, Reginald John Henry Moses. They had two sons, Reginald and Kenneth Campbell. The family lived for a time at Milson's Point before moving to Killara at the beginning of the Depression. They had moved to Manly before Reginald's death  in 1936. Agnes was then employed as a librarian at the Daily Telegraph. She continued to live in the Manly area until her death when aged 83.

Enid Campbell Thom was born at Bexley (Rockdale) when the family was living at Camelot in Forest Road. In 1923, at Linfield, she married Dr Robert Horner Fletcher, an ear, nose and throat specialist. Robert had enlisted in the AIF in May 1916 and was awarded the Military Cross for his actions in France. Initially Enid and Robert lived in Gladstone, Queensland. In 1933 Robert undertook post-graduate studies in London and Vienna. The family then moved to Lismore where Robert died in March 1935. Enid and Robert had two children - Sheila and Robert. After Robert's death Enid moved to 89 Raglan Street in Mossman. When she died in 1979 she was 82 years old.


Annie Thom died on 17 November 1911. The following notice appeared in the Sydney Morning Herald on 18 November 1911:

Annie was only 47 when she died and missed observing the adult lives of her children and their families. 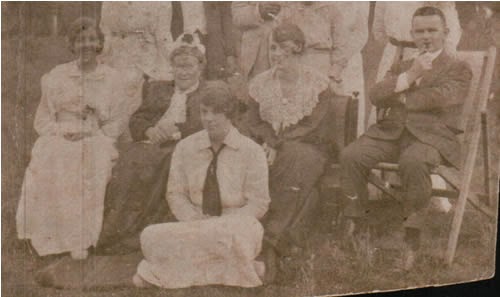 Above is a family photograph taken of the Thom sisters - Agnes is seated on the left of the row while her husband is seated in the deck chair on the right of the photo. Nellie is seated next to RJH Moses while Enid is sitting in front of them. The elderly lady sitting between Agnes and Nellie is "Granny Smith" who may be Annie's mother, Sarah McCallum who died in 1924.

Annie Smith was my great grandmother.
Posted by Vicki's Blog at 16:50