In front of the door at St Mary's Church, Todmorden, Lancashire, England is a memorial containing inscriptions from gravestones relating to members of the Lord family. 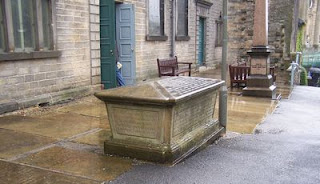 Stone  2 (side) And also Simeon Lord his grandson was interred April 12th 1726. (2)
Also here lies the body of Simeon Lord of Howroyd son of the first named Simeon Lord who departed this life on 24th day of February in the year 1740-1 and in the 73rd year of his age. (3)

How do the six people listed on this memorial connect to Simeon Lord 1771-1840 who was transported to New South Wales arriving in 1791?

(1) Not a great deal is known about Simeon Lord who died 1 April 1682 except that he had two sons and a daughter that we know of - James, Martha and Simeon (1668-1742). He is described as living at Howroyd.and was Simeon's great, great, grandfather.

(2) Simeon Lord who were interred on 12 April 1726 was born in 1700 and was only 26 when he died. His parents were Simeon Lord and Susan Ashworth and he had three brothers and two sisters. He was Simeon's great uncle.

Howroyd is mentioned at the residence of some of the family members on the tomb stones.

Howroyd Farms Todmorden on the Todmorden and Walsden website provides the following information plus images of the remains of the stone buildings on the site.

Howroyd was a group of four farms and a couple of cottages, huddled together in one small community high up above the hamlet of Cloughfoot in the Bacup valley. The community more often than not would consist of members of one extended family.

Howroyd was a very ancient farm dating back many centuries. Records from the 1600s show us it was a stronghold of a Lord family.

From the tombstones members of the family were at Howroyd in the second half of the 1600s until at least the mid 1700s.

Dobroyd is the other location mentioned in the second part of the 1700s and early 1800s.
Posted by Vicki's Blog at 20:29