The Lord Family in Todmorden area

Howroyd
From the information on the tombstones at St Mary's Church, Todmorden, members of the Lord family were at Howroyd in the second half of the 1600s until at least the mid 1700s.

Howroyd was a small farming settlement between Bacup and Todmorden. It was situated on slopes above the hamlet of Clough Foot. The settlement consisted of four small farms plus a couple of cottages. The farm houses were grouped together but each farm had separate land for farming. The largest of the farms consisted of 35 acres. The farms were isolated on the side of  a hill with a winding narrow track leading down to Clough Foot in the valley below. The path continued on to another farm higher up the hill. Any supplies would have to be brought up from Clough Foot. Early records show that members of the Lord family lived at Howroyd during the 1600s and for part of the 1700s. This information ties in with the information on the grave stones.

A list of baptisms at St Mary's Todmorden for families with Lord as a surname between the years 1670-1781 lists Howroyd as the place of residence for many of those baptised between 1688 and 1725 followed by a seventeen year period when no place of residence is provided. http://freepages.genealogy.rootsweb.ancestry.com/~todmordenandwalsden/lordbapstmarys.htm#anchor1

Photos of the ruins of the farm buildings show small buildings made of grey stone. Sheep farming would have been the main use of the land.

Dobroyd
Dobroyd is the  location mentioned in the second part of the 1700s and early 1800s as a place where members of the Lord family lived including Simeon's parents. The area appears to have been  about a mile south from the centre of Todmorden and initially possibly consisted of small farms. Simeon's parents were yeoman farmers at Dobroyd - farmers who owned or leased their land and could use it without direction from others.

Before 1800 there were two cotton mills at Dobroyd - the upper and lower mill both connected by Dobroyd Lane. There was definitely one mill in the area in 1794. The Upper Mill was demolished in 1841 after the railway arrived in the area in 1840.  The Fielden Brothers operated the Lower Mill from 1832 until 1879. The mill was demolished in 1880.
http://freepages.genealogy.rootsweb.ancestry.com/~todmordenandwalsden/dobroydmill.htm

Between 1866 and 1869  John Fielden built Dobroyd Castle which is still in the area. See John Fielden of Dobroyd Castle for additional information about the castle and photos.
http://freepages.genealogy.rootsweb.ancestry.com/~todmordenandwalsden/johnfielden.htm#anchor1

Knowl
Knowl was another area inhabited by Lords. Members of the Lord family also lived on farms in the Walsden area south of Todmorden -particularly at Knowl where there were two farm houses  (Great Knowl and Lower Knowl) one hundred yards apart along with several cottages and barns. Records show the Lord family living in the area in the 1660s but they may have been there for some years before then. The records of St Mary's Church show that Simeon Lord died there in 1667. This Simeon Lord was our Simeon Lord's great, great, great grandfather. His son, Simeon was one of the farmers at Howroyd.

The tenants living at Knowl were farmers and clothiers. An online article on Knowl describes clothiers as farmers who diversify by manufacturing woollen cloth in their homes with the help of neighbours living in nearby cottages. The cloth was then carried by packhorse to market towns for sale. Additional wool would also be purchased. From 1750 cotton was also purchased by many clothiers to be woven into cloth. There were members of the Lord family living at Knowl until the early 1840s. 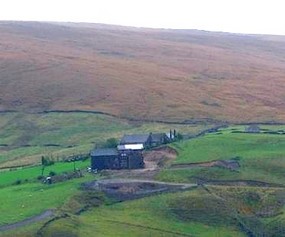 More details about the cottage industry weaving cloth that flourished in the Todmorden region for centuries until the arrival of the Industrial revolution in 1780 can be found at http://freepages.genealogy.rootsweb.ancestry.com/~todmordenandwalsden/homeweaving.htm#anchor1

It is therefore probable that members of the Lord family were generally involved with growing wool and manufacturing and selling cloth at the cottage industry level which goes a long way to explain some of Simeon's future activities and interests in Australia.

The records from St Mary's Church and other churches in the area show that there were a large number people in and around Todmorden with the surname Lord. Families, including extended families, tended to live close together. Having located connections between three communities in the area from the 1660s it is probable that if complete family trees were available links between the various Lords could be established.

NB: Much of the information for this post came from the website - Todmorden and Walsden - which was online for many years -
http://freepages.genealogy.rootsweb.ancestry.com/~todmordenandwalsden. In 2017 the pages disappeared again. Rootsweb is revising its hosting service and the pages may or may not reappear. I have decided to leave the links on the page for the short term (April 2018).
Posted by Vicki's Blog at 23:12