Looking for a few clues about the SS Somersetshire, the screw steamship that brought George Hutton to Australia in 1869 I decided to have a look in Google and found a 'goldmine'.

Christchurch City Libraries in New Zealand have digitised the log book kept by one of the passengers - W C Walker. There is only a brief reference to George - Mr Hutton an inoffensive young fellow - but there is a wealth of information in Walkers's description of the voyage.

Log on board the S S Somersetshire from Plymouth to Melbourne

The second reference was a link to The Somersetshire News: a ship newspaper issued on board the S S Somersertshire on her voyage from Plymouth to Melbourne.

One of the passengers on board the ship was Dugald McDougall (of Sands and McDougall) who collected the weekly copies of the weekly newsletter read to passengers and had them printed in one publication when they arrived in Melbourne. Copies were then made available for any passengers who wanted a momento of the journey. The State Library of Victoria has a copy which has been digitised and made available online.

The National Library of Australia also has a digitised copy of another Somersetshire publication - The Somersetshire Sea Pie - April to July 1870. 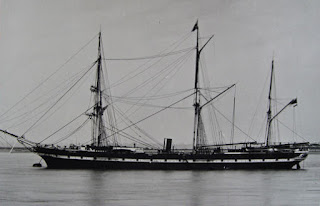 I did find a web page specifically on the Somersetshire. Not only does it have a picture of the ship but it also includes information about when the ship was built, details of the ship plus a timeline of voyages including significant incidents that took place on voyages.

A search in Trove provides an article published in the Australasian on the arrival of the Somersetshire in Melbourne.

ARRIVAL OF THE S.S. SOMERSETSHIRE
The magnificent screw steam clipper Somersetshire, of Messrs Money Wigram and Sons'  fleet, entered Port Phillip Heads early on Monday morning from London and arrived in the bay in the course of the forenoon. The present voyage of this fine ship is the most rapid and successful which she has ever yet accomplished, and it is highly gratifying that the prestige which she has acquired on her last run home from this port has been amply sustained by her present achievement. Notwithstanding the difficulties she had to contend with at the outset of her career, there were not wanting those who had faith in the good ship, and who fearlessly asserted that she would yet distinguish herself, and make for herself a name second to no vessel of her class trading to these colonies, and their confidence would appear to be by no means misplaced. But for the Royal Mail steamer putting in the appearance she did on Sunday, the Somersetshire, it may be stated, would have placed us in possession of at least a fortnight's later English papers. On her present trip she has brought out about fifty saloon passengers and 140 in the second and third cabins, and the opinion expressed by them relative to the ship and her commander, Captain Atwood, and his officers, was almost enthusiastically favourable. Previous to leaving the vessel, a very flattering address was presented by them to Captain Atwood. The Somersetshire left Plymouth at midnight of July 1, and had S. E. winds for two days after sailing. With but slight exception, variable westerly winds prevailed to the equator, which was crossed only July 19, and some steady running was made to the Cape of Good Hope, the meridian of which was passed on 4th August. From the Cape of Good Hope to Cape Otway, which was made on the 29th ult., the ship bowled along beautifully, and the distance from the Leuwin was accomplished in four days, the greatest day's work, as shown by the log, being 322 knots. Alter the bustle incidental to arrival is got over, the Somersetshire will be thrown open for public Inspection, and there is little doubt but that opportunity will be taken, as heretofore, by hundreds to inspect this splendid ship.
Australasian Saturday 4 September 1869 page 15

I also found another article about Herr Bandmann, an actor, who was a passenger on the Somersetshire plus an article mentioning some of the other passengers.

MELBOURNE.
(FROM OUR CORRESPONDENT.)
Monday, August 30.
Herr Bandmann the great German actor, came out by the Somersetshire to-day. He was not received as great stars should be. The sudden arrival of the mail kept people so much occupied during the forenoon, that the Somersetshire was at the Heads and well up in the Bay before anybody was aware of it. Those who had seen his portraits, however, could not mistake him as he landed on the pier, and if I am any judge of faces and physique, I should say Mr Harwood has not made a bad selection.

Amongst the arrivals to-day, in the bay, was the steamship Somersetshire. This fine ship proves herself a formidable competitor to the Great Britain, in the swiftness of her passages, as on this trip from England she has come out in 58 days which is the quickest passage she has yet accomplished. Among her passengers are Mr Smythe of the Melbourne Press; Mr W.
C. Smith, of Ballarat: Colonel Thompson, of New Zealand: and Mrs G. C. Levey, wife of Mr G. C. Levey, formerly member for Normanby. Captain Atwood, under whose command she is this trip, deserves the greatest credit for the manner in which he has again brought this favourite ship into these waters.
Geelong Advertiser Tuesday 31 August 1869 page 3

With all this new information I have now changed the focus of my next assignment for Writing the Family Saga unit.
I now have to concentrate on doing some writing.
Posted by Vicki's Blog at 22:22