The Week Three theme for the National Family History Week Blogging Challenge relates to the First World War, particularly events in August 1916. This post is not strictly on topic however when you look at the huge number of deaths of Australian soldiers in 1916 the establishment of a support group for the widows and widowed mothers of those who died is important.
The first meeting of the War Widows' and Widowed Mothers' Association of Victoria (WWWMAV) was held in Melbourne in May 1922. After the First World War a number of support groups were established for war widows and / or widowed mothers but most of these groups have disappeared over time. In 2016, although the membership is shrinking, the War Widows' and Widowed Mothers' Association continues as a support group for its members. 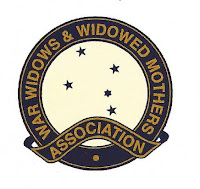 When my father died in 1984 my mother was contacted by the local branch of the WWWMAV and her membership of this organisation continues. For many years she has been secretary of the local branch. The age of the membership is currently around 90 +, give or take a few years, but the ladies continue to meet regularly when health and other commitments allow.

Towards the end of 2003 a decision was made at a WWWMAV State Council meeting that the ladies would like a history of their association to ensure that in the future there would be a record of their organisation and their activities. My mother suggested (volunteered) that I should undertake the project so much of 2004 was spent reading the minutes, newsletters and other papers that had been kept (unfortunately minutes of the AGM prior to 1948 are missing). I also conducted a small survey of sample WWWMAV members as well as reading background material available in books and online about events affecting the lives of widows and widowed mothers during and after the First World War. In 2005 the Patriotic Funds Council arranged for the publication of War Widows and Widowed Mothers Association of Victoria: the first 82 years and copies were made available to members.

Although legislation such as the War Pensions Act 1914 paved the way for the payment of a pension to widows, and later widowed mothers dependant on their sons who died serving overseas, the pension was well below the basic wage and women with children, in particular, faced financial difficulties. A decision was therefore made to form an organisation to promote the cause of war widows and widowed mothers. Inintially, as stated in the WWWMAV constitution, the group worked towards attaining the betterment of pensions, amenities and concessions for war widows and widowed mothers and their families as well as the promotion of fellowship, interest and co-operation among members with help and advice wherever possible to the bereaved. This group has proved to be an important network. During and after World War II the WWWMAV quickly absorbed and assisted a new generation of widows and widowed mothers.
Twenty-nine branches of the WWWMAV were founded throughout Victoria though a number have closed over the years. The Association has been governed by a State Council. Statewide events included an annual State Conference, an annual Get-together Luncheon and an annual Pilgrimage to the Shrine. The WWWMAV also produced a monthly publication, Remembrance, for members.

Caring and sharing can be seen as two major functions of the Association as the WWWMAV works as a support group for its members. Branches hold regular, often monthly meetings which may be followed by a speaker or a product demonstration. Bus trips to a variety of destinations have been a popular activity. In the past many groups also organised holiday trips for members. Branch anniversary and Christmas celebrations have also been important and well attended functions and in many cases have also been attended by members of neighbouring groups. Especially after the Second World War when the existing group membership was joined by younger members, often with young children, an annual Christamas Treat for the children was organised.

When WWWMAV was established visiting patients in repatriation hospitals was an important role of members. Members continue to visit their members who may be hospitalised and regularly check on the needs of members who are unwell. The WWWMAV has maintained a close association with Heidelberg Repatriation Hospital including members attending services at the hospital.

Anzac Day and Remembrance Day are special days of commemoration with members often attending services at the Shrine or services organised by their local RSL. An annual pilgrimage to the Shrine was a regular event. The WWWMAV branches work with their local RSL branches and also with local Legacy groups.

From the early 1950s WWWMAV funds purchased holiday homes at Rosebud and Olinda and later at Ferny Creek allowing members and their families the opportunity of affordable holidays. In 2004 ownership of the remaining homes at Rosebud was transferred to Carry On Victoria. Seventy-five thousand dollars was also been placed in a trust fund with the interest used for an annual nursing scholarship at Federation University, Ballarat.

Support, care and companionship remain key elements of the WWWMAV as well as providing information for members regarding benefits and services. At meetings and other functions it is never forgotten that the current members are widows of men who served in Australian forces.

The membership may be aging but the WWWMAV plays an important part in the lives of its members, providing the opportunity to form friendships and share experiences. To quote one of the members replying to the survey question - why she joined the Association - "Lovely club, wonderful girls, great friends."
Posted by Vicki's Blog at 20:23