Golfing Foursome is the title of the Sepia Saturday post no. 317 . 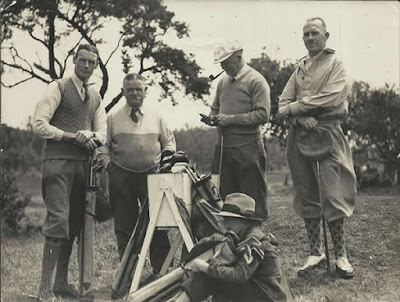 The above image of a Golfing Foursome is one of my favourite family photos.It was probably taken in the 1920s or early 1930s. The golfer second from the left is my grandfather, Reg Moses. Unfortunately I do not know the names of the other three golfers. No names were written on the back of the photograph and there is no-one that I can now ask who might know. The young caddie in front of the golfers may be my father but as he is almost hidden under the large hat it is difficult to be certain one way or another. I do know that my grandfather enjoyed playing golf and in his obituary it was stated that he was a member of the Manly Golf Club and The Lakes Golf Club. From the newspaper paragraphs below he appears to have played much of his early golf at Killara.

A quick look in Trove showed some articles mentioning golf scores made by my grandfather in the early 1920s:
The scoring at Killara in the four ball best-ball against bogey was remarkably good, no less than four pairs returning cards of 6 up: C. E. F. McKay (16) and R. J. H. Moses (13) ... (Referee 2 November 1921)


IN BROILING HEAT. Saturday was a distressing day, with very humid heat. Golfers, notwithstandinging, went forth for a game as usual, though one would have thought the harbor or surf much more enticing. Every week some Killara man or other puts up a splendid score. On Saturday it was R. J. H. Moses.- Last week he romped home an easy winner in the B Grade with a 4 up from the 11 mark. This week he won the A Grade with a 67 while rated at a reduced handicap of 8. The score, which represents 7 up on bogey in his handicap, was  Out — 3 6 4 6 4 3 3 5—38 ; in— 4 5 3 5 6 4 4 4 5 —40 — 78. The first 6 was due to a missed putt, the second to nursing his drive and finding the ditch, the third to again diffing his drive. Moses is a powerfully built man who, until recently, played with a pronounced crouch, which made it impossible for him to be accurate. This he evidently recognised, for he now stands in an orthodox manner. With practice he has the makings of a really fine player, provided he is temperamentally sound.(Referee 14 March 1923)

The Referee was a sports newspaper published in Sydney.


The C E F McKay mentioned as playing with my grandfather was Claude Eric Fergusson McKay (1878-1972), one of the proprietors of the newspaper, Smith's Weekly, where my grandfather worked as a journalist and literary editor. He is possibly one of the other men in the photograph. His biography in ADB describes him as 'an enthusiastic golfer, he belonged to the Killara and Elanora Country clubs in Sydney.' E C McKay was also listed as playing in the same competitions but have not, in a quick search been able to find out anything else about hime except that he played golf for many years.

Some years later a paragraph in the Referee 18 January 1934 suggested that my father also played some golf when he was a teenager, probably with his father or encouraged by his father:
KEN MOSES, 'The Little Boy from Manly,' aged 15, 5ft 10 in in height, and 12st 5lb in weight, has been vacillating in his choice of golf or swimming as a sport on which to give his serious attention. Maybe swimming will win for he won the 220 yards swimming handicap at the Manly carnival on Saturday, beating a big field of youngsters who never saw his heels for spray. A disinterested outsider, however, might suggest that in view of his bulk wrestling would be more in his line.
I am not aware of my father playing golf later in his life but swimming continued as a favourite activity.

My grandfather also wrote a book about golf entitled Fore which was published in 1937. R J H Moses died in 1936. My grandfather was known for writing about humorous aspects of life and the book was written to entertain ordinary golfers in the 1930s. The name of the author on the original publication was given as Pa Golf and the illustrations were said to be by Mel - Syd Miller. The book section of Trove shows that the book was also published in Sydney. Investigating newspapers in Trove I found two reviews for the book:


Golf Humor
Usually the man who regards himself as a born humorist, and insists on trying to be funny, is an infliction, but Mr. R. J. H. Moses, who writes humorously about golf in "Fore" (Eyre and Spotttswoode, London), is that extreme rarity, a funny man who is really amusing. "Personally, we have always been in favor of girl caddies," he writes, in a chapter on how to run a golf club. "The club could dress them like they do the usherettes at the picture palaces. What, we mean is the costumes would be appropriate to the season, and the event in progress — open necks and backless for the open events, high neck and button-up gaiters for the close championship, fur trimmings in January, and mesh net in June, of course, it will be argued that this would inevitably lead to the abandonment of the mixed foursomes; but we're not worrying about that. Who wants to take his troubles to the golf links anyhow? And pay green fees for her?" In the same strain, Mr. Moses writes about tho professional golfer, the new member, the oldest member, club secretaries, the art of putting, golfng temperament, and other things, The text is illustrated with a dozen clever and amusing drawings by "Mel."
The Age Literary Supplement 24 July 1937

In a succession of new books on golf it has been left to an Australian, R. J. H. Moses, to provide humour. In 'Fore' (Messrs. Eyre and Spottiswoode) there is as much pleasure as may be obtained in years of keen observation of the frailties of golfers and the incongruities of the game.
Writing from the point of view of the ordinary club member the author, aided by clever illustration by Mel, does not ridicule the game, but finds fun in it. 'The driving mashie was a club invented long ago for women, but not for golf.' he says.
Chapters on 'A Lesson from the Pro.' 'Mixing it in Mixed Foursomes.' 'Playing Behind a Slow Four,' 'The Oldest Member,' and 'Golf Cuckoos' reveal in a new light trials and tribulations familiar to every golfer. The book can be confidently recommended.
The Courier Mail 27 August 1937

Once again it shows how useful  Trove can be in providing information that can add to or back up (or sometimes disprove) a family story.
Posted by Vicki's Blog at 12:33