The family lived at a number of locations including Turramuarra, Milsons Point and Killara before moving to 69 Wood Street, Manly, in 1933. Ken attended Chatswood Intermediate High School. The move to Manly no doubt suited the teenager who joined the Manly Lifesaving Club. As well as swimming and surfing he also played rugby and supported the Manly Rugby League club. Ken's interest in sport is shown in the following paragraph in the Referee 18 January 1934.

KEN MOSES 'The Little Boy from Manly,' aged 15, 5ft 10 in in height, and 12st 5lb in weight, has been vacillating in his choice of golf or swimming as a sport on which to give his serious attention. Maybe, swimming will win, for he won the 220 yards swimming handicap at the Manly carnival on Saturday, beating a big field of youngsters who never saw his heels for spray. A disinterested outsider, however, might suggest that in view of his bulk wrestling would be more in his line.

Ken left school when he was 16 and initially worked as a junior at an advertising agency, O'Brien Publicity Company, earning 15/- a week. However Ken wanted to go bush and twelve months after leaving school he was on the train for the two day trip to Morven in south west Queensland to work on a property owned by  R J (Dick) Boyer. Dick Boyer and Ken's father had been friends from their time together at the University of Sydney. A paragraph in the Australian Women's Weekly 30 November 1935 page 4 confirmed that Ken was working on a property in western Queensland at that time.  He was employed as a jackaroo on Durella and worked there for about three years. Before he left Sydney his father arranged for Ken to meet a literary acquaintance - Banjo Patterson - so he could receive advice about what it was really like living in the bush.

What happened after Ken left Durella is a little confusing. I have a photograph, dated 1938, of Ken at the Manly Life Saving Club Ball held in the Hotel Manly Ballroom. A note on the back of the photograph states that he 'had travelled from Thurloo Downs, 220 miles west of Bourke, leaving Thursday morning, arriving Sydney Saturday morning having travelled 720 miles for Ball Saturday night, left for Forbes 240 miles following night for Uah shearing.' Unfortunately I do not know when in 1938 the Ball was held however I have been able to locate the two properties mentioned via a Google search. An article about Ken in the Chadstone Progress (28 October 1981)  states that when war broke out 'he was working on 1.25 million acres 200 miles west of Bourke'. This was probably Thurloo Downs. We also know that sometime between leaving Durella and enlisting in the Army  Ken worked as a wool scouer at the Bourke Wool Scour.


At the Carnival last Sunday Mr. Bill Cowderoy introduced "Mergathroyd Physizalwhacker" who won all the diving events at "the Olympic Games in 1066." This distinguished person (Ken Moses) amused the vast audience with a series of fancy diving never before seen in Bourke — or any where. His turn met with great applause, and his fancy dress was "something out of the box". Congratulations Ken!

I suspect that much of the employment on stations was seasonal and that men went from one property to another as required, hence the reference to leaving 'for Forbes 240 miles following night for Uah shearing.'

Shortly after war broke our in September 1939 Ken, now 21, applied to enlist in the Air Force but as there was a long waiting list he joined the Army instead. He was 21 when he and a mate travelled to Sydney to enlist in the Army. His Attestation Form and Service and Casualty Form show that Ken passed the medical examination for the Army at Victoria Barracks on 2 January 1940 and from 3 January he was stationed at the Army Camp at Ingleburn as part of the 2/4th Battalion. The following day, in full uniform, the soldiers marched through the streets of Sydney. There was little time to say goodbye to family and friends for on 10 January, only a week after joining the Army, members of the 2/4th Battalion were aboard the Strathnaver on their way to Palestine where they arrived on 13 February 1940.

The next nine months were spent training. The 2/4th was an Infantry Battalion but the soldiers also had training with an anti-aircraft regiment. On 9 November 1940 members of the 2/4th Battalion were transferred to Egypt and were initially stationed at a camp near Alexandria before moving to Mersa Matuh. In January 1941 they fought against the Italian soldiers at Bardia before moving on to Tobruk and later to Benghazi arriving as the Italian soldiers surrendered the city.

Ken did not go to Greece on 1 April 1941 with the rest of the 2/4th Battalion as he was in hospital with bronchitis. However later that month when the decision was made to evacuate the troops from Greece, Ken was aboard the Costa Rica, one of the evacuation ships. Loaded with troops, the Costa Rica was one of four Allied ships that were bombed and sank during the evacuation. The men from the Costa Rica managed to board other ships and were taken to Crete. When the Germans began bombing Crete the soldiers were evacuated from the island aboard a number of ships. Ken was aboard the Dido which although bombed by the Germans managed to reach port safely. The 2/4th Battalion then returned to camps in Palestine and Syria where they experienced a white Christmas.

In Palestine on 12 January 1942 members of the 2/4th Battalion embarked on the ship, Rajula, to return to Australia arriving in Adelaide on 27 March. After a period of leave the members of the battalion were sent to Darwin and from there to New Guinea, however the war was over for Ken as his health had deteriorated - he now had chronic asthma - and on 22 June he received a medical certificate stating that he was unfit for service in the army and was officially discharged on 16 September 1942.

Back in Australia, Ken returned to Bourke for a time before working as an overseer on another property in the Morven area, Victoria Downs. It was there that he met his future wife. However working in the outback affected his health and the decision was made (reluctantly) to return to Sydney and have a career change. 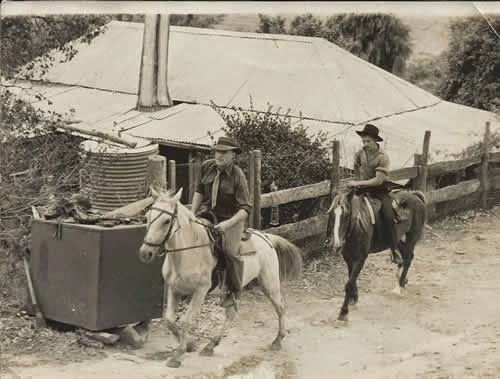 In 1944, Ken was offered a position as a trainee journalist on the Daily Telegraph. His first by-line was covering a story in the Blue Mountains where, as the picture on the left shows, his bush experience was an advantage. In 1945 he then spent a year in Canberra working at Parliament House in the Press Gallery. In 1946 he moved to Melbourne to work on the Sun News Pictorial as a sports writer. In 1948 he went to London to cover the Olympic Games and in 1950 he was in Auckland covering the Empire (now Commonwealth) Games.

Ken joined the staff of The Argus newspaper in May 1950 and was a sports writer and columnist on the paper until its closure in January 1957. Although he was interested in all sport, Ken wrote primarily about athletics, swimming, cycling and tennis. He also wrote a column, Why Keep it Quiet, in which he was renowned for expressing his opinion about the management of sport. Many of his articles were picked up by Australian Associated Press. In 1956 Ken was a member of the Press and Publicity Sub-committee for the organision of the Olympic Games in Melbourne.

When The Argus closed life changed again with Ken working in a variety of jobs, all related to journalism. These included twelve months at The Sporting Globe, Victorian manager of Rodney H Evans Advertising Agency, public relations manager for AMF ten pin bowling (when 10 pin bowling was introduced into Victoria), deputy news editor of Channel O -now Channel 10 - (when Channel O first opened) and editor of the short lived revival of Smith's Weekly. When Sunday newspapers began in Melbourne Ken worked on the Weekender and then the Sunday Observer. He also worked as a free-lance journalist for a time, worked on the journal of the Institution of Engineers Australia then finally worked at the Department of Trade. Ken was an active member of the Victorian branch of the Australian Journalist Association and was on the committee for a number of years. He also helped write books including White over Green which is the history of the 2/4th Battalion and My World on Wheels, the autobiography of Russell Mockeridge. Ken was assisting Max Rowley write the book, The Rowleys: golden years of cycling, when he died. When the book was published in 1990 it was dedicated to Bert and Eileen Rowley, Keith Rowley and Ken Moses.

At St Phillip's Church in Sydney on 11 February 1946, Ken married Rosemary Ann Lord. After a two week holiday on Phillip Island, staying at the Phillip Island Hotel at Cowes, they then moved to Melbourne to live. They had two daughters and one son. Initially they lived in rented accommodation until purchasing, with the aid of War Service Home Loan, a newly built house in East Bentleigh. The family moved to East Bentleigh in May 1955. With family in Queensland and New South Wales, the summer holidays were spent visiting those states.

Ken loved Australia, especially its history. He loved to travel and saw much of the country when working or on holiday. Many of the pieces that he wrote for the weekend newspapers featured places he had visited in Australia. In later years he also spent time working on the family tree. He was so pleased when he discovered that the convict, Uriah Moses, was his great grandfather. After Ken died we discovered another seven convicts on his family tree. He would have been so pleased with this discovery, especially as one of the convicts, William Roberts, was a First Fleet convict.

When visiting family in Queensland, Ken became ill and died in Brisbane on 16 September 1984.

Being a New South Welshman through and through, Ken always said that he felt much better once he had crossed the Murray River and was back in New South Wales. However when he was in hospital in Brisbane all he wanted was to return home to Melbourne. The funeral service was held in Brisbane and being far from home most of Ken's many friends were unable to attend. However, as he was an ex-serviceman, the RSL arranged for members of a local RSL to attend the funeral and the Last Post was played. This was greatly appreciated by Ken's family. Ken's ashes were returned home and interred at the Springvale Cemetery in Victoria.