Most of us have collections of family photographs - some with information attached, many without. Photographs can be an extremely useful resource when unlocking family stories. 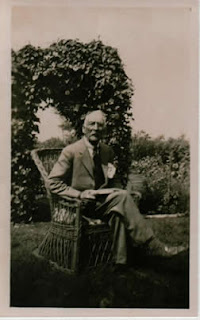 The above photograph, taken c1935, is of my great grandfather, George Hutton (1850-1936). It was taken on my grandparents' property, Metavale, near Cunnamulla in south-west Queensland.

The photograph is useful not only for providing an image of George - 'an old man with a beard' who spent his time reading or writing (according to my mother who was a young girl at the time).  What is particularly significant is the garden in the back ground. This area of Queensland is known for its  saltbush vegetation suitable for grazing sheep but not growing lush gardens. 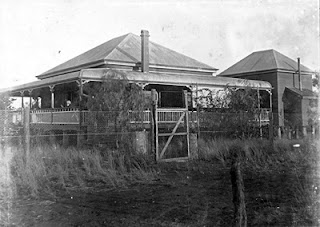 By comparison, the above image found online at Queensland State Archives shows what the homestead looked like in 1910.  In the 1980s I interviewed my mother about her memories of growing up in Queensland. She described the garden at Metavale -

Mother had quite a nice garden considering there was only bore water and the climate was terrible. There was a lot of bougainvillea growing on the trellis in the front. One of the things that would grow was a saltbush hedge around the house. There were also oleanders. Mother did have a nice flower garden in winter and spring. Dad grew vegetables.

Using the Images search option in Google is one way of locating images online. 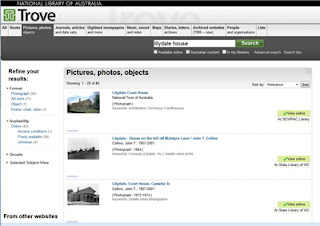 Trove (Pictures, photos, objects section) is a useful site to look for images from Australian websites including the sites of the major collecting institutions in the country.